The Honor Magic3 arriving on August 12 was spotted on Geekbench yesterday with a Snapdragon 888+ SoC, 8GB RAM, and Android 11. Now it has appeared on AnTuTu as well, but with 12GB LPDDR5 RAM and a few more specs.

The benchmark database reveals that the Magic3 will have 512GB of UFS 3.1 storage onboard and its screen will have a 120Hz refresh rate. However, it doesn't mention the panel's type, resolution, or diagonal. 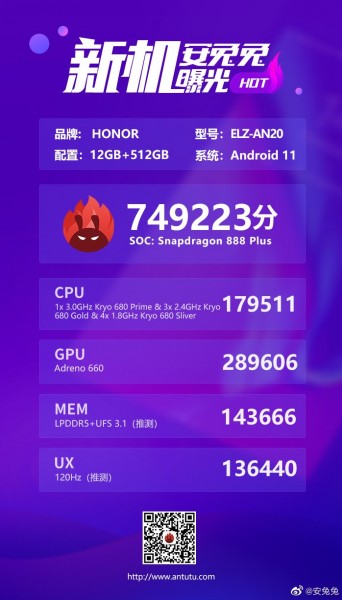 Talking about the performance, the Magic3 scored 749,223 points in AnTuTu's test, which is less than what the Snapdragon 888-powered smartphones achieved in our tests. That's because this could be an engineering unit and you can expect better results from the retail version.

It's also worth mentioning that the Magic3 that popped up on Geekbench had model code ELZ-AN10, whereas the one that passed through AnTuTu has model designation ELZ-AN20.

Honor hasn't detailed the Magic3's specs sheet yet, but thanks to previously shared official teasers, we know it will come with two cameras on the front and five on the rear.

Honor's CEO confirms the SD 888+ for the Magic3 series, talks about photography

AnTuTu scores are down almost 6 to 10 percent compared to June..let's wait and see what will be the score after original release..still 888 is overheating and 888 plus does not look promising !

As I couldn't find closest topic. No mentioning anywhere that P50Pro tops Dxwhatever?