After skipping the Honor Note 9 last year, the company is going to resurrect the lineup with the Honor Note 10 shortly. And it's not just rumors anymore - Zhao Ming, Honor's president, posted on Weibo about the upcoming device. 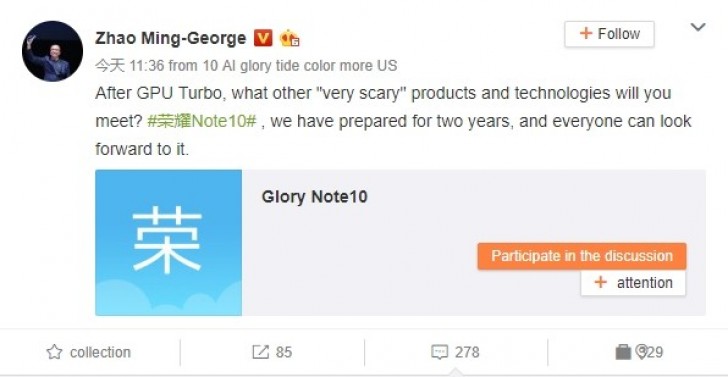 In the post, Zhao Ming says that the OEM has been working on this device for about two years now, which explains why they missed on the Note 9, so fans should be looking forward to device's official release. Google translate is a bit rough, but we can assume that the president is teasing more products alongside the Note 10.

Unfortunately, the post doesn't give up anything else except that we should expect the device sooner than later. But from the previous report, we can be pretty sure that the device will feature a massive 6.9-inch Super AMOLED display from Samsung. And if the Honor 8 and Honor Note 8 releases are anything to go by, the Honor Note 10 should come with the more powerful HiSilicon Kirin 980 towards the end of this year.

Not sure about the point of having Note series phones be it Honor, Xiaomi or Samsung etc when regular phones are having 6 inch display.