Huawei's sub-brand Honor will show off the first flagship with an in-display selfie camera on January 22 in Paris. The outline of the upcoming phone is featured in an invite for the unveiling that prompts us to See the Unseen.

Our best guess is that the outline is of the Honor View 20, successor to the flagship Honor View 10, which was released in January this year. It will be the first flagship phone with a pinhole selfie camera and will feature the Kirin 980 chipset from the Huawei Mate 20 and Mate 20 Pro. 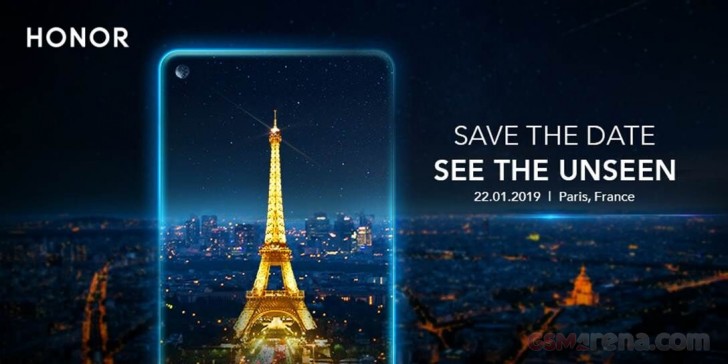 Samsung will be the first maker to show off a phone with an in-display selfie camera - the Galaxy A8s will become official with an Infinity-O display on December 10. Huawei itself will show off the nova 4 a week later on December 17. So upon January 22 we'll already have "seen the unseen" but we hope Honor will have some surprises left for the event.

Indeed. I've always liked how good and complete Samsung phones are.... But good isn't just good enough anymore. It needs to be flawless, exemplary, and legendary