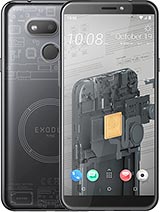 Bruh that camera bump is pissing me off

fizzi khan, 16 Jan 2020I really don't understand whats wrong with HTC company. I a... moreThere are few reasons which were causing HTC to become the way it is now. One of the reason being Google bought most of the HTC design talents and made more 2000 of HTC employees to move to Google to work on the Pixel series.

I really don't understand whats wrong with HTC company. I am still waiting for such a mobile from this company which beats all mobile when it release HTC One M7.

Adul Al Salami Kebab, 07 Nov 2019Block-chain? Doesn't a block-chain phone have to be secure ... moreAgreed, plenty of clueless people in the comment section who think this phone lives up to its name

IpsDisplay, 30 Oct 2019Seems like people in the comments have no clue about judgin... moreBlock-chain? Doesn't a block-chain phone have to be secure and power efficient? This phone has a obsolete chip-set with sub-par security & is not at all power efficient being built on 28nm! O_O

Seems like people in the comments have no clue about judging value for money with Blockchain phones.. so they just look at the usual specs and act like it's a regular phone lol

seriously disappointed with this release, i understand the budget, but they should focus on including more value, as is i would not buy it, and i'm patiently holding out hoping they come with something fairly good..

wow full node bitcoin, that means it can verify its bitcoin transaction of its bitcoin wallet by itself

Do they lost their mind? How can they go for old dated type phone. it doesn't match with blackberry name. It's good to go for all but not like this.
I can't believe it

Looks like HTC has over supply in their parts bin and just put what ever they got together and created this junk. Please stop producing rubbish and tarnishing your once proud name.

At least use the SD439 ...
Why should someone spend over 200 dollars for an overlooked Alcatel phone , its even worse than any Alcatel or a Motorola phone with the same price range

Is this a new source of revenue for HTC? Seeing how far you can take a joke or a dare? Surely, somebody must be paying HTC for putting out a bad idea. I honestly like the design, the bezels, the right screen corners and no holes and notches. A breath of fresh air. But seriously, micro USB and Oreo?