HTC One M9e launches in China: One M9 with A9's camera

We should abandon our traditional timekeeping measures and just name months after HTC releases. Here's Miss October, aka HTC One M9e. Note the "e," this is different from the original One M9, the M9+, the M9+ Supreme Camera, the One E9, E9+, E9s dual SIM...

That I had to type the previous sentence is all that's wrong with HTC's product strategy. And as if things weren’t confusing enough, Tmall, where the M9e launched, often calls the handset just "One M9," even though it is not. 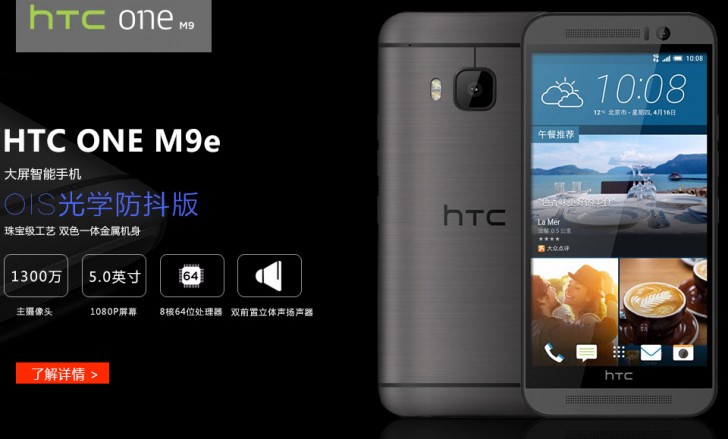 What it is is a One M9 crossed over with the new A9. No, you don't get the snazzier new design (even though HTC says it will bring the A9 style to One M and Desire phones), but you do get the 13MP OIS camera. Unfortunately, this also means that you're limited to 1080p recording, no 4K.

And it's not the chipset this time either, this handset uses the One M9+ chipset – the MediaTek MT6795T Helio X10. That one is perfectly capable of 2160p video, unlike the Snapdragon 617 in the One A9. You don't get 3GB RAM either, just 2GB. And 16GB of storage instead of 32GB.

To recap, the HTC One M9e is an M9, but with A9's camera, a parred down M9+ processing power and video capture. There's no secondary camera on the back or laser autofocus, but you do get the UltraPixel selfie camera.

Having launched on Tmall isn't a great indication that it will be available in the west, by the way.

htc should change their naming scheme, i don't mean to be bias, but samsung's way of naming their wire range of handsets is better.

I guess HTC will NEVER learn. Instead of focusing on one good device, they are just releasing irrelevant phones for the Asian market with almost no value to them.