The contents of the HTC One X+ retail package are identical to those found inside the box of its predecessor and, more recently, the Windows Phone 8X.

There's a pair of cheapish-looking headphones inside, and the usual charger/data-cable combo. Given the One X+ has no microSD slot, we couldn't have expected a memory card inside, but there are no Beats headphones either.

The final item in the box is the pin required for extracting the microSIM tray.

It's true that the Galaxy S III has a slightly larger screen (4.8" vs 4.7") to show for it, but HTC still deserves credit for the good job it has done. The weight has increased slightly compared to the One X, due to the increased battery capacity, but still stands at the easily tolerable 135g.

At first glance the HTC One X+ design is identical to that of its predecessor, save for the red accent around the camera lens and the red capacitive touchscreen buttons. Take a closer look (or simply put the One X and One X+ side by side) and another difference shows up.

The HTC One X+ is actually made of darker polycarbonate than the One X. This helps the One X+ look slightly more stylish as the greyer color looks a bit worn-out. The darker back also works better with the red rim around the camera lens and feels nicer to the touch. There's some extra texture which we find more pleasant and grippy, even if the difference is minor.

All in all, the slightly refreshed polycarbonate unibody might not be as ground-breaking as it was six months ago, but it's still quite impressive.

Above the screen, we have the proximity and ambient light sensors to the left of the earpiece and the 720p video call camera on the right. There's a tiny status LED under the earpiece grille.

The usual sensors and the video-call camera flank the earpiece

Underneath the screen, we find the three controls typical of HTC droids. The haptic-enabled capacitive touch Back, Home and Task switcher keys are well spaced and very responsive.

The capacitive keys are red this time

The left side of the HTC One X+ features the microUSB port, which is used for data transfers, charging and, thanks to its MHL support, TV-out. With an MHL adapter you'll be able to output 1080p content to your HDTV directly from your phone, so purchasing one is probably worth it.

The microUSB port on the left side

On the right side we find nothing but the super slim volume rocker. A camera key would have been nice, but adding one in the short time the One X+ took to arrive to the market was probably impossible.

At the top we find the 3.5mm audio jack, a microphone pinhole and the Power/Lock key, which is easy enough to hit when needed but still reasonably secure against accidental presses. The microSIM slot is located nearby at the sloping part of the phone's rear body. You need to insert the SIM eject tool located in the retail box or a pin inside the hole next to the slot to access the microSIM tray.

It's quite crowded at the top

As usual, at the bottom of the phone, you will see the mouthpiece.

There's nothing but the mouthpiece at the bottom

The back of the HTC One X+ features the 8MP camera lens and the LED flash right next to it. As before, the camera lens is placed on a bulge, but judging by the One X the protective glass is strong enough to resist picking up starches with time.

The other elements at the back are the loudspeaker grille near the bottom and the Beats audio logo right above it. You should keep in mind though that the audio enhancements are only available when you have connected a pair of headphones and not when using the loudspeaker itself.

The 8 megapixel camera is the star backstage

The HTC One X+ is powered by a non-user-replaceable 2100 Li-Ion battery (that's 300 mAh more than what the One X has). We ran our tests and ended up with an endurance rating of 44 hours. The number would have been higher, but the phone's standby is not very efficient. Otherwise, the One X+ does very well in the individual categories. 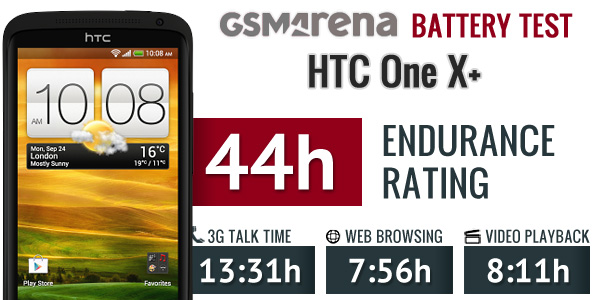 You can read more about its battery life in our blog and more about how we do these test here.

Ive been using my htc one x plus for over 6 mounth now after my galaxcy s2 broke......trust me or not it was the best decition ive made....this is one of the best phone....i even put my phone under the water tap to clean my screen at times and nathin...

I have been using HTC One X+ for few months now. Its amazing piece of engineering, sleek and beautiful. IPhone 5 is good looking than this, but considering the cost, this is more value for the bug. Specs are good. Couple of times, it became hot durin...