US HTC U12+ gets camera and pressure-sensitive buttons update

Earlier this month, HTC pushed an OTA update in Taiwan to the U12+ adding new features and a much-needed update to the pressure-sensitive buttons. The patch weighs 437MB and the build number is 1.21.617.3. Тhe changelog outlines the very same update we saw with the Taiwanese version of the device. The most important fix is for the pressure-sensitive buttons that should now be more responsive and won't get in the way of the Edge Sense gestures. The double tapping on the edge should work better now too.

The update also brings the so-called Auto Zoom feature for video recording. But despite what the name says, the functionality is actually a manual zoom, which behaves differently than the Sonic Zoom option. The handset is also capable of unlimited 4K@30fps video recording from now on. 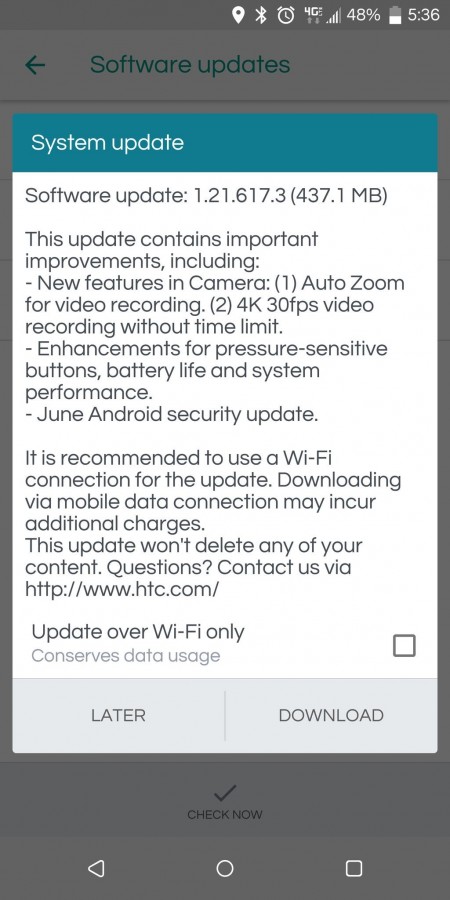 The usual battery and system performance improvements are also at hand and the security patch us bumped up to June 2018.

I updated and used it a few days. There are no issues with buttons (a bit harder to press than normal buttons - which is an advantage for me) and Edge Sense (which is amazing).

Yes, you can definitely argue that HTC has shot itself in the foot with those missteps. However from journalism standpoint, GSM Arena should just study the changes and then report the results. Btw, Alex from AC has updated his review.

HTC intentionally thins out the metal construction just to make the sensors feel the squeeze. If HTC uses cheap Titanium like Essential PH-1 (and add plastic shock absorbers between the metal and glass), it'll be harder but the sensors will never wor...