HTC just announced the U Ultra smartphone at a keynote filled with U puns. The personal touch is all over the place, with a brand new Sense Companion assistant taking center stage.

But before we try to make some sense out of this Sense Companion, let's cover the best bit about the U Ultra - it's covered in Sapphire glass. What Apple tried and couldn't achieve (out of yield constraints, admittedly), HTC has done on its new flagship. The huge catch here is that the Sapphire will be limited to an exclusive edition to be launched later in the year. 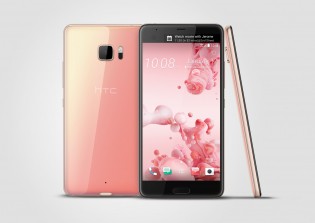 In terms of specs, some might call the U Ultra a repackaged LG V20 - it sports a 5.7-inch QHD display with a secondary portion on top, only here it will be home to the Companion. The chipset in charge is the Snapdragon 821, so if you were hoping for a Snapdragon 835 introduction, you'll need to wait some more. There are 4GB of RAM and 64GB/128GB storage versions with microSD for expansion.

The HTC 10 lends its camera setup to the U Ultra - a 12MP UltraPixel unit with large 1.55µm pixels behind an f/1.8 lens with OIS. This one is made of Sapphire crystal on all version, at least. The HTC 10 had laser autofocus, the U Ultra adds phase detection to the mix. On the front you'll be getting a 16MP shooter, which will also output 4MP images for the UltraPixel-nostalgic among you. 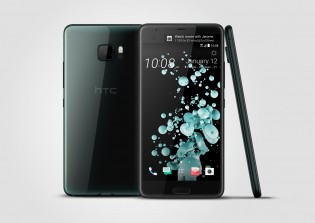 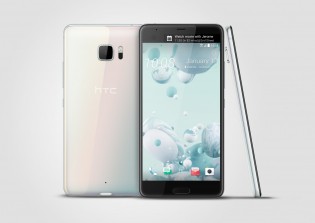 What's not too great is battery capacity - 3,000mAh for this much display sounds like a red flag. You'll be charging that battery through the Type-C USB port, which just happens to be the only wired interface on the U Ultra - farewell to the 3.5mm jack. It's all because of U, though - that enables HTC to deliver a personalized audio output to match the specifics of your eardrums. Like an equalizer, only better. Supposedly.

Liquid surface is the new design philosophy that the U Ultra introduces. It manifests itself in a fully symmetrical all-metal unibody, which also happens to be all-glass on the outside. We're still trying to wrap our heads around that.

The U Ultra will be available globally this quarter, which is not particularly specific. Price will be $749 in the US, pre-orders open now, and units will start shipping in mid-March.

Well I like my iPhone 6s Plus! The 7 and 7 plus only have a newer chipset but essentially is the same as 6s plus and since I got the 128gig model I'm flush with capacity whilst my iPad Pro 9x7 has 256 gig of cpu memory!😎

Lol. You're only lying to yourself.

I have galaxy note 4 for 1.5 years and still snappy and no lags.