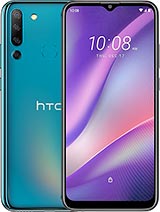 For the price looks just fine
It's a budget smartphone

T Abdull, 16 Mar 2021Can HTC pls release an unexpected surprise smartphone with ... moreThe link to the 7 was great. Be nice to see a rebirth of something similar in 2022.

Moon, 10 Apr 2021, HTC brilliant qualityI had 2 HTC phones prior to switching to Apple iPhone 8. I loved the HTC very robust, full aluminum case, I believe machined from 1 billet and for someone who drops their phone regularly the HTC was great. I’d still be using it but the power button jammed and I couldn’t find anyone to fix it.

Why is E3 pretty much identical to E1 released years ago? Just with higher price?

Anonymous, 24 May 2021In the Android space flagship doesn't have enough cust... morethe HTC products are good and their battery last

In the Android space flagship doesn't have enough customers if you're not spending a fortune staying in everyone's line of sight. Then your get unknown asian firms piggytailing off the back of your advertising.

Commonly i heard that htc is quality mobile.
I belive in it.

It's a worse Xiaomi Redmi 9A with smaller battery but slightly better camera, released almost a years later. Just shut down already HTC, you died in 2017.

HTC should just quit already! Whatever happened to the company is what I don't seem to know. Wildfire E3? Go rest old soldier. The battle has advanced!

Would be competitive at around 160€ for the 128 GB model. I guess 180€ would still be acceptable. The display is kind of a bummer.

Can HTC pls release an unexpected surprise smartphone with all resent features in multiple colours but in initial design something like this in the link below
https://m.youtube.com/watch?v=sDNPBj09rpE&t=18s

I'd rather buy an HTC One

Good phone but the android 10 not good

Outdated phone, not even worth for a low-end device in 2021