The people section is where you can select your friends and contacts whose Facebook galleries you want to display right in your Photos hub. It's a nice feature for social network users but will be only an empty section for those that aren't too fond of Facebook.

The camera roll presents your entire collection of photos and videos captured with the device in a 4x5 grid. You cannot change the layout. Viewing a photo can be done in either portrait or landscape mode. Zooming in on a photo is done by either double tap or a pinch. The camera roll doesn't downsize pictures and you can enjoy them in full resolution.

The Music + Videos hub in charge of all multimedia

Windows Phone has both music and video combined in one interface with the Music + Videos tab.

The default Windows Phone 8 media players are on board too. They reside together in the Music + Videos hub, which now bears the Xbox logo or the last played media thumbnail. When you start it, it shows the History, which gives you quick access to the last two items played, or you can go to the full menu and start the music or video player, listen to or watch podcasts, or go to the Marketplace.

The music section is made up of albums, songs, playlists, genres and artists. Videos features all, television, music videos, films and personal - think of them like more as categories you can assign your videos to when syncing with Zune. The third section is where you can store all of your downloaded audio and video podcasts.

The music hub has a simple and straightforward interface. You won't have any difficulties using it. However there are some things missing, like an equalizer. Another missing feature is the ability to scrub through a song - you have to press and hold on the FF/rewind buttons to simply skip back and forth.

Update: Since the GDR2 update, the 8S now has FM Radio support, as well.

As a music player, it's pretty standard - your tracks are sorted by artist, album, playlists or you can view all songs. Under the album art it lists the next three songs to be played - really helpful if you're using shuffle. There's no way to manually reorder the upcoming songs, but you can reshuffle them if there's one you don't like.

The video player is integrated into the Music + Videos hub. It has a very simple interface - you have fast forward and rewind controls, a timeline and a video size button that toggles full-screen.

Video support on the 8S was spotty and we again had problems getting all XviD videos to play smoothly, if at all. We were also unable to get 1080p videos to work properly, where they would oddly play at about 1/10 of the normal speed. MOV files played and that's a rare occasion in our tests.

Since Windows Phone 8 is no longer Zune dependent, you can easily upload videos off your computer in USB mass storage mode.

Individual items can also be pinned to the homescreen - like a song or video.

The loudest audio output around

The most impressive part of the HTC Windows Phone 8S audio output is its loudness. The smartphone is the loudest we have ever seen (except for the good old Nokia N91) both with and without headphones attached to it. If volume levels are what you are after this is the handset for you.

Sadly, the output isn't perfectly clean - the distortion levels are above average, while the noise levels and dynamic range are nothing to write home about either.

The stereo crosstalk wasn't the best in the first part of the test, but increased only a little when we plugged in a pair of headphones, so it's good overall. The frequency response was spot on in both cases. 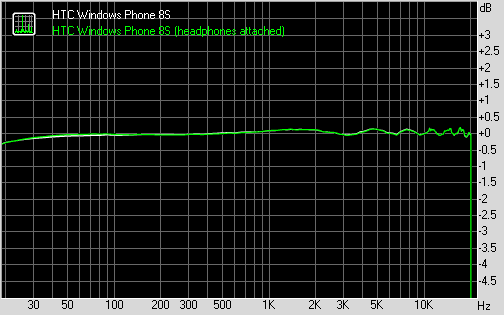 My htcs8 it's off and not work today I don't way? help me please

The phone is completely rubbish have ever bought. Can't download. Apps in fact useless.asking. For activation code without providing reliable. Means of getting it

This phone is basically a rubbish version of the Nokia lumia 900. Its only advantage over it is that you can use an sd card, but that's it. Beats audio is nothing special, and the duel core feature runs no faster then than the single core of th...