The Huawei Ascend P1 is one of the headliners in the company's growing Android portfolio. But the Chinese don't just grow droids, they refine them. The Ascend P1 isn't even the best they have, but it sends a clear message that Huawei means business. The big-screened smartphone boasts a 7.7mm thin chassis with enough tech inside to go after some of the big names in the game. 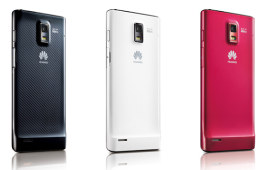 The Ascend P1 is one of the slimmest droids out there and the P1 S version will be a full millimeter thinner. Undoubtedly the 4.3" qHD Super AMOLED screen (as seen on the Motorola RAZR XT910 and the HTC One S) helped achieve the marvelously slim waistline.

The computing power comes courtesy of a dual-core 1.5GHz processor and PowerVR SGX540 graphics, which is more than enough to keep the Android 4.0 Ice Cream Sandwich OS chugging along smoothly.

You can get quickly acquainted with the Ascend P1 through our lists of features and disadvantages below.

The 8MP camera of the Huawei Ascend P1 can shoot 1080p videos but it knows other tricks too and will be stepping on Samsung's and HTC's toes. You get stuff like HDR, burst mode and even group mode, which takes several shots and picks the best expression on each person's face (just like the Scalado-powered solution HTC uses).

However, unlike either Samsung or HTC, Huawei offers you stock Android ICS experience, with only a few occasional tweaks. If that's not your cup of tea there's also the 3D home launcher to offer the extra eye candy and usability enhancements.

The Huawei Ascend P1 at ours

Challenging the establishment is not an easy task, but the Huawei Ascend P1 is ready to make a splash in the upper mid-range. The first step is solid hardware - jump to the next page for the details.

Actually iam planning to buy P-1 thats why iam reading some comments about this phone and i noticed it was all positive except for the battery issue' where can i buy an extra battery or if the battery has damaged is the technician can fix it ? thanks...