Dual camera for a midranger

The Honor 6X is among the first mid-range devices with a dual camera sensor setup for main photos. The company has used two cameras with drastically different resolutions: a 12MP camera + a 2MP depth sensor - most likely to keep costs down. Whereas the Honor 8 used a 12MP RGB sensor with a second 12MP black & white sensor, the Honor 6X uses a slightly inferior system. Here, the second sensor is used only for gathering depth information about the scene so that it allows applying high-quality faux bokeh effects (adding a blurry background behind your subjects).

There is no laser-assisted AF like there is on the Honor 8, nor a dual-tone LED flash. Those things don't necessarily matter for most conditions, such as outside in bright sunlight. The Honor 6X uses phase-detection autofocus, and the company claims the 6X's camera can focus in 0.3 seconds. 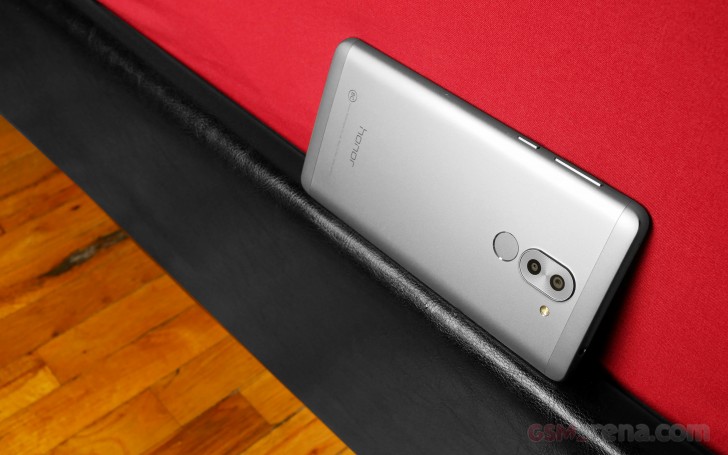 Otherwise, the overall camera experience is quick and painless. Photos are taken quickly, and the camera app does not lag more than it should. We give Honor kudos for a well-made camera interface with quick focusing and fast-responding tasks like launching the gallery or editing a photo.

Let's get right into how the camera performed. We'll start off with the standard UI and delve further in.

You get a pretty good viewfinder, and if you've ever used a Huawei phone in the past year or so, you'll pretty much know where everything is. Swipe to the right for all the modes swipe to the left for settings, and a swipe up will take you to the gallery.

The secondary sensor is only active when a feature that requires it is selected. If a standard shot is taken and the 2MP sensor is covered with a finger, the camera would shoot just fine. In fact, you'll be notified to "avoid covering the lenses before you start shooting" only when in wide aperture mode. This is perhaps the only mode that will use the second sensor.

The notification doesn't show in any other mode - not even 'night shot' mode where it might have been useful. This essentially means the dual-camera is only good for wide-aperture mode, and nothing else.

This also means that taking a standard photo relies on the light from a single sensor rather than both sensors like on the Honor 8. Even so, choosing a dual-sensor setup over a single one is worth even for the wide-aperture mode alone as it works remarkably well.

Second sensor aside, the Honor 6X still offers a vast variety of shooting modes to bring out the creative shooter in you. While there is no proper monochrome mode, you can use the included filter in the built-in editor to make B&W photos. In fact, there are quite a few monochrome filters to choose from.

We feel like Pro mode should work in unison with wide aperture mode to give you an experience closer to a DSLR. But the (often) wonky bokeh effect might be reason enough to keep them separate. Maybe this is something that could be implemented in a future update, but for now, you can't set manual exposure in a wide-aperture photo. Perhaps you can use the focal point to expose your photo, and then apply the bokeh as usual.

Most of those are pretty self-explanatory, others - not so much. Night shot mode uses longer exposure times to shoot in lower ambient lights, so it works best with a tripod. The 'Good food" mode makes photos look slightly warmer and more saturated to make food look its best.

Taking a photo with a filter

Creative modes aside, let's have a better look at photos taken with the default Auto mode.

The Honor 6X took pretty decent photos in ideal lighting conditions, but it was hard to get the camera to expose correctly under a moderate overcast, which we've been getting in New York City a lot lately.

The situation indoors doesn't get that much better. Textures look fuzzy, solid colors often come out noisy and much like outdoors, the camera's white balance is inconsistent and colors are noticeably 'off.' The photo with the lemons kept showing them with an ugly green tone until the lime was placed in front. The green lime acted as a more accurate reference point for the camera to balance colors.

The limited dynamic range mean highlights tend to clip easily. Therefore, the resulting photos are underexposed to save the highlights. HDR doesn't really seem to do much of anything in most conditions. Though, where HDR did make a more noticeable change was in reducing most of the noise in scenes with low-light. Otherwise, in daytime photos, HDR only opens up the shadows a bit without affecting the highlights.

Let's move on to the camera's HDR mode.

The shot of the bridge with HDR mode opened up the shadows a bit around the base of the leave-less trees, but the highlights are mostly unaffected. The New York City street corner doesn't fare well either. Shadows are brought up a notch, but the building in the distance is more blown out with HDR mode than in a regular shot. Look out for a couple more HDR examples coming up in the low-light section.

HDR photos in sunlight did a better job out of rescuing the clipped highlights. In the park scene, you can see that this camera is prone to a red lens flare when the light source is really strong: like the sun.

Moving on to wide aperture mode, here are a couple of shots and some variations of the focal point with a simulated aperture of f/4.0.

Wide aperture mode is much like the iPhone 7 Plus's portrait mode, which uses the second camera to gather depth information about the scene in front of it. The Honor 6X's wide aperture mode makes use of the 2MP depth sensor.

Here's something worth noting: images taken in wide aperture mode tend to be slightly cooler than their counterparts shot in auto mode. We're not sure why this is. You can compare the first image to the other three in each wide aperture scene.

This mode works best when the subject is within 2 meters away from the camera and the bigger the distance to the background, the better. Ideal places would be a somewhat open area like a large room or a place with open areas like a park or lake.

The scene with the benches offers a pretty good look at what the mode is and isn't capable of. The photos with the focus on the table pretty much establishes that you can't expect a smartphone to simulate a professional-grade camera's lens-bokeh, at least not yet. Not without a more accurate way to gauge the depth of every single object.

Editing the focus and simulated aperture in viewfinder

On the bright side, you can edit the bokeh effect to simulate using an aperture from f/0.95 (most bokeh) all the way to f/16 (no bokeh), and you can change the point of focus and bokeh after the photo is taken. This will let you tweak the photo as much as you want before deciding if the shot is worthy of social media.

Finally, if you refer to the last photo of the first set of samples, it would give you an example of what the wide-aperture mode is actually simulating. This is the camera's natural bokeh, but the only way to get this effect is to focus on a subject that's small and really up-close to the lens; in this case, the object was about 2 inches from the sensor. When the camera has to focus from really close - like a macro shot - everything further behind is blurred out.

Moving on, low light photos are quite noisy. Details become foggy & muddled and colors could be one or two notches more saturated.

The sunset shown is not representative of the live scene that was experienced. As well, the second scene could make use of more vibrant colors and brighter shadows, the moderately cloudy weather was enough to throw the camera off.

The actual low-light mode works much better to capture details and textures much more accurately. The only downside is, these results are only possible with a tripod. There are four different versions of each scene below.

Night mode acts as a Bulb mode on professional camera where once you press the shutter, it would continue shooting until you are happy with the exposure, which you see as a live preview on the screen. The shutter speed starts ticking right after you tap the shutter button and can be anywhere from 6 seconds to 14 seconds. The images retain a lot more detail and are the best among the samples we got out of the camera. The downside to that is you absolutely need to keep the camera super steady while it's shooting.

The front-facing camera is an 8MP snapper, and the resulting selfies look okay. Retained details of the subject are decent enough to be flattering while details in the background aren't maintained well. Background highlights clip easily in selfies probably due to the moderate dynamic range of the camera.

Dynamic range isn't that much better than the main camera. The next selfie was taken in a tree's shade near where the previous three were taken, this change in lighting causes the camera to blow out the highlights.

Dynamic range takes a hit when taking selfies in the shade

Panorama mode can be used in portrait or landscape mode, and it's pretty much a shoot and sweep type of game. This one was taken in portrait mode with 3,008 pixels tall, and it caps off at 11,328 pixels wide. Oh yeah, there's also a wide-selfie mode which is accessed by toggling panorama mode with the front camera enabled.

The videos samples look much better than still photos regarding color accuracy and exposure. The highway scene is exposed better, and we can see more blue hues in the sky than there are in images. Still, sharpness is a bit low and details are spared. Surprisingly, audio is recorded in stereo, unlike many recent flagship devices like the Google Pixel, which only records a single audio channel.

Thankfully, there's a Pro mode for video as well so even content creators can get behind manual controls for video recording as well.

One last downside is the absence of any kind of stabilization for shooting video, so there's no need to put up moving samples of those.

How to manage battery its shutdown easly

The phone it look very nice