Our Honor 7 Lite came in a box in bold turquoise color. "Honor" was stamped twice - once in big faded letters, once in small reflective letters. We had to look at the back to see Huawei mentioned. See what we mean about separate branding?

Anyway, inside was the phone itself in Silver (Gray and Gold versions are available too), a (Huawei branded) 5V 1A charger and a microUSB cable, a SIM ejector tool and some documentation.

The Honor 7 Lite measures 147.1 x 73.8 x 8.3mm. That's a little more than the Huawei P9 lite in all directions, we mostly feel the extra thickness (vs. 7.5mm thick P9 lite). It definitely does not feel bulky but is not slim either.

It's a hair heavier too, 156g vs. 147g, though you'll need scales to tell. The weight conveys substance and solidity like you would expect from a metal phone.

The Huawei Honor 7 Lite (5c) looks like it belongs in a flagship lineup. Indeed, the back is almost identical to a number of upmarket offerings while the P9 lite had a look that was more its own.

The back of the Honor is made of aircraft grade aluminum with brushed finish. Running all around it is a plastic rim with grooved sides, allegedly to improve grip. That's the opposite of how the P9 lite (the more expensive model) was built - it had a metal frame and a plastic back. 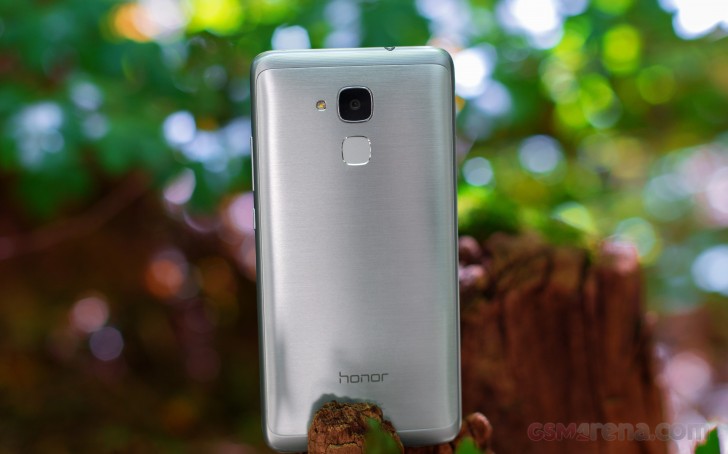 Anyway, we appreciate trying to improve grip but it failed - the plastic is too polished and slippery. It does improve durability though, the sides of the phones get the most dings and aluminum dents while plastic bounces back. There's also scratch-resistant coating to make the sides even more resistant to cosmetic damage.

Like the rim, the metal back is a bit too smooth and polished, which gives it a slightly plasticky feel. However, it looks great and it expertly hides fingerprints (the Silver version especially). And it is grippier than the plastic.

The Honor 7 Lite swaps the material palette around: metal back with plastic sides

Despite being thicker than the P9 lite, the Honor 7 Lite has a protruding camera while its downtown sibling has a camera flush with the back. The camera lens is centered, keeping the phone stable on its back, but you need to be careful placing it face up.

Below the camera is the fingerprint reader. At least that's the case with the Honor 7 Lite. The Honor 5c lacks this sensor, so if the Honor 7 Lite isn't available in your region, you may need to go up to the P9 lite for the added security and speed of a fingerprint lock.

Anyway, the fingerprint reader is easy to reach with your index finger. It's recessed so you can feel it out.

We have mixed feelings about the back. The build is high quality, the materials are on par and it looks good. But it kind of looks like a OnePlus 3. Or an HTC. If you're okay with not having the most unique-looking phone, the Honor 7 Lite offers premium quality on a midrange budget. The Huawei P9 lite looked more like its own thing.

The front of the Honor 7 Lite (5c) is covered in glass with no official scratch-resistant qualities. It's a flat sheet of glass, no beveled edges here (so far, so P9 lite).

Above the screen are the earpiece and 8MP selfie camera. To its right is a tiny status LED. It's so faint that you may not even see it during the day (the contrast with the white front is especially bad).

To the left of all that are the proximity and ambient light sensors. On the Silver and Gold they are quite visible, but they fade into the background on the Grey model.

Below the screen and on the back is the Honor logo, there is no mention of Huawei here.

There are no hardware keys here, Android keys are on the screen. They are on the small side so they don't take up a lot of the 5.2" screen. Even so, we always hit them reliably (at first we were worried about miss-presses).

The Android keys on screen take up minimal space, but are easy to hit

At the bottom of the phone is a standard microUSB 2.0 port, Huawei puts Type-C on flagship devices only. Around the port are two grilles - the right one hides the loudspeaker, the left one the microphone.

Two Torx screws fasten the back to the rest of the phone, a clear sign the Honor 7 Lite is not meant to be user-serviced (nope, not even changing the battery).

The top side of the phone holds no surprises, just the 3.5mm headphone jack and the secondary mic.

The right side of the phone is home to the volume rocker and the power key. The keys are a bit too low, making them more difficult to press.

Shallow keys are not easy to press

On the left is the card tray. The Honor 7 Lite (5c) is a dual-SIM phone, but it has a hybrid slot, meaning you lose SIM2 if you put in a microSD card. Considering the phone has only 16GB of storage (of which you can only use about half), we think of this as a single-SIM phone that has the option to temporarily use a second SIM - that is until you run out of space for photos and videos, which is going to be fast).

After 3years of usage he survived all falls, made good pictures and videos, battery life is ok not the best but not the worst either. So definitely I'm sorry to say goodbye to him probably best phone I had in my life so far.

That no fingerprint reader in Europe is not true, at least not everywhere. I have it and use it on mine for year and half already. And no, I haven't ordered it from Asia or something. Got it from my mobile phone service provider as package.