There is plenty to say about the Honor 7X’s hardware considering how much Honor’s “#X” series has evolved over the past two iterations. The Honor 5X was an excellent value while offering many features of flagship smartphones such as a metal-clad body, snappy fingerprint sensor, and amply-sized battery. The Honor 6X refined the overall design, but it still didn’t feel quite as premium as a more expensive smartphone. 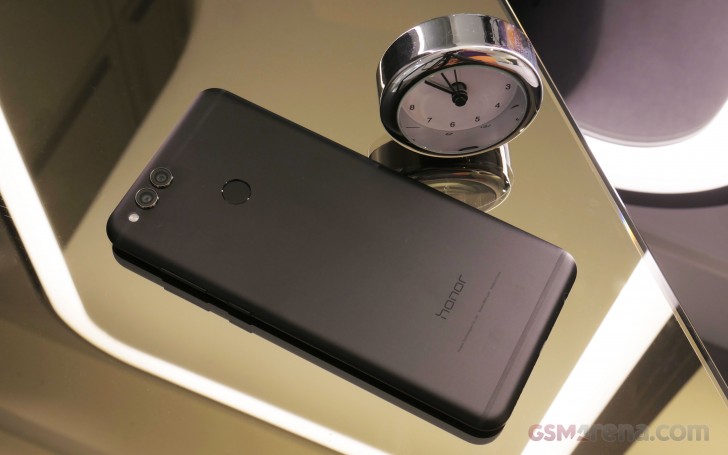 Given the price range, the Honor has some very impressive hardware on its hands. Although the anodized metal uni-body design with rounded edges (a la iPhone 6) has been done many times, Honor has taken this design and figured out how to build it with a stronger and sturdier metal construction (no thin metal jackets) while keeping cost very low, passing the savings onto those who purchase one. 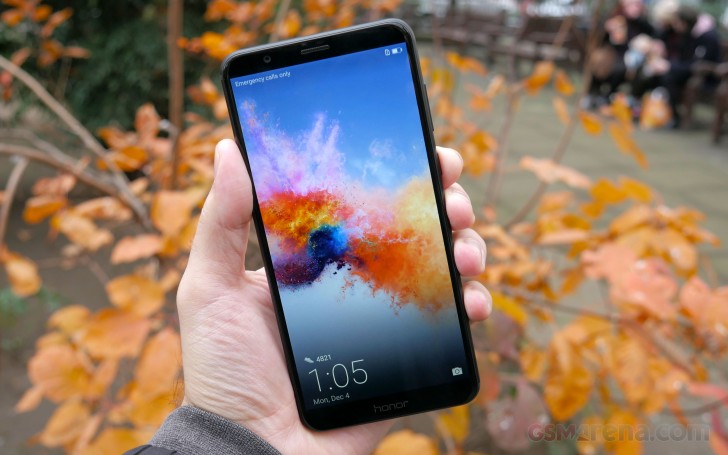 The Honor 7X’s display is 5.93-inches diagonally and features Full HD+ resolution. Honor calls its 18:9 display “FullView”. The front bezels are not as tight as we’ve seen on other devices, but still pretty darn small. The Honor 7X is identical in every dimension as the Huawei Mate 10 Pro, minus the length – the Honor 7X is slightly longer than the Mate 10 Pro.

Above the display is an earpiece and a front-facing 8MP camera. Under the display is an Honor logo, printed under the glass. Speaking of the glass, Honor didn’t explicitly say what kind of glass it is using on the 7X, so you’ll likely want to keep the factory protector installed to avoid scratching the delicate glass. The glass is subtly curved down into the frame of the phone, but not enough to call it “2.5D glass”.

This frame, however, is one of the sturdiest we’ve ever seen on a phone of this price range. In fact, the phone barely flexes under pressure, which confirms that Honor is using a high-quality structural design, a significant improvement over the structural designs of the Honor 5X and 6X, which were frailer in their designs. 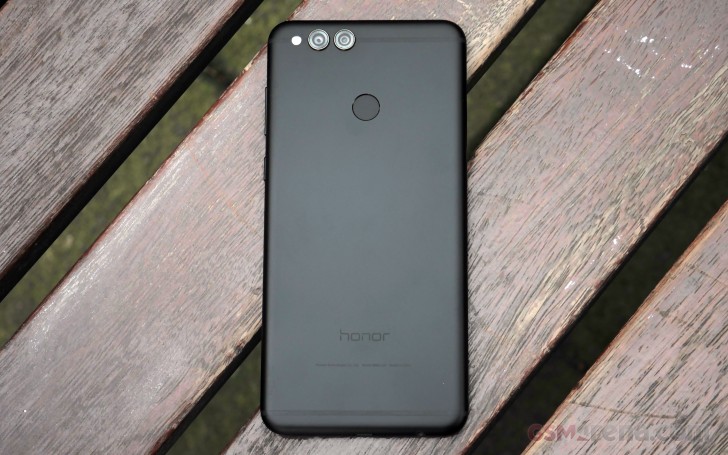 Here’s some good and bad news: the good news is there’s a 3.5mm headphone jack, the bad news is the phone uses an outdated microUSB charging port. Considering that Huawei is really pushing the limits with a low-cost smartphone that includes an 18:9 display, we’ll give it the benefit of the doubt. Next to the microUSB port is a single bottom firing loudspeaker, we’ll assess its loudness in our full review of the Honor 7X.

On the back side is a very familiar construction: a metal uni-body design with rounded edges and antenna lines. By now, this design has almost tired itself out - and from the looks of it, the market is going to shift towards glass-sandwiches: a trend that Samsung started with the Galaxy S6 and has only just now made its way into Apple’s iPhones. It’s not to say it’s a bad design, but one that we’ve seen since 2014. Again, this is how the devices stay cost-efficient. On the back is also a fingerprint scanner, one that Honor claims can respond in 0.25s. Our initial test has shown it to be consistently quicker than that of the Pixel 2 XL’s. Huawei has among the fastest and most accurate fingerprint sensors on smartphones.

The Honor 6X brought the dual-camera to this price bracket, meanwhile, the 7X’s camera gets a resolution bump. There’s a primary RGB 16MP sensor, which is used in conjunction with a 2MP depth sensor. The second sensor is used for bokeh-effects and helps in low-light situations.

The Honor 7X will go for just $200 (3GB+32GB plus a microSD slot) in the US, $50-less than the asking price for the Honor 6X at launch in the US. Do keep in mind that there is one real compromise: no NFC – so no mobile payments or Android Beam sharing. Other than that, you can get the experience of a smartphone in the $400 bracket for just $200.

The Honor 7X will be a tougher sell in Europe, however, due to its higher €299 starting price and its less-popular brand name.

The 7X’s construction is amazing for this price-range. In fact, if Honor put a USB-C port in the 7X and asked for $259 ($10 more than the 6X’s original asking price), we’d still consider recommending it. Honor’s 7X comes with EMUI 5.1 out of the box, which runs very smoothly on the 7X. In the near-future, Honor will update the 7X to EMUI 8.0 (Android Oreo), which further refines the user interface and adds some of the software features from Android 8.0. 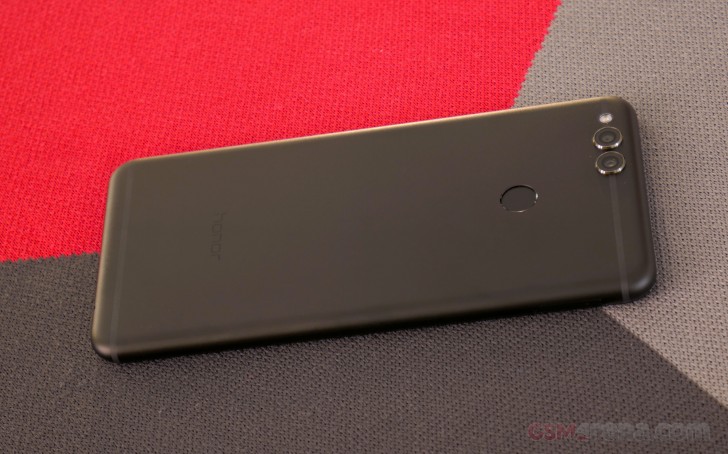 If you’re on a very tight budget for a new smartphone, or you are shopping for a smartphone for a first-time user or teen, the Honor 7X is very promising. Stay tuned for our full review of the Honor 7X as we put the sturdy handset through our rigorous testing process.

No,it's £269 in UK and it comes with more ram and storage