The Huawei Mate 10 builds on the impressive legacy of last year’s model. It maintains a classic 16:9 screen, but this time it’s sharper thanks to its QHD resolution – 1,440 x 2,560px. This pushes the pixel density up to 499ppi as the diagonal measures the same as before, 5.9”. Huawei did enable HDR10 support for a superior viewing experience.

The new Leica dual camera also marks a massive improvement over the outgoing model with its super bright f/1.6 aperture, which will let much more light in than the old f/2.2 aperture. The camera maintains its assistants – OIS, Laser and Phase detection AF.

The dual camera on the back has a 12MP color sensor + 20MP black & white sensor. It offers AI-enhanced 2x digital zoom and can record 4K video. The selfie camera sticks to 8MP.

The chipset is also new – the Kirin 970 is built on an efficient 10nm process and its NPU will accelerate machine learning tasks. This spans anything from language translation to scene recognition for the camera. The new Mali-G72 MP12 GPU brings the additional performance to feed the new higher resolution screen.

Huawei’s software, EMUI, has been updated to version 8.0, which matches its Android base – Oreo. The software can connect to a DisplayPort monitor for a desktop-like experience. When you’re on the go, you can split the 5.9” screen for two apps to share.

The Huawei Mate 10 comes with 4GB of RAM and 64GB storage, which you can expand via a microSD card (the phone has a hybrid dual SIM slot).

Fans of battery longevity will be pleased to hear about the 4,000mAh capacity, which you can top up quickly with the TÜV Safety Certified Huawei SuperCharge – 20 minutes of charging is all you need to get you through the day.

The Mate 10 lacks full water sealing and only comes with IP53 rating, so if you want a phone to take to the poolside the 10 Pro might be a better choice. The regular Mate 10 does feature a 3.5mm audio jack, though, unlike its sibling. 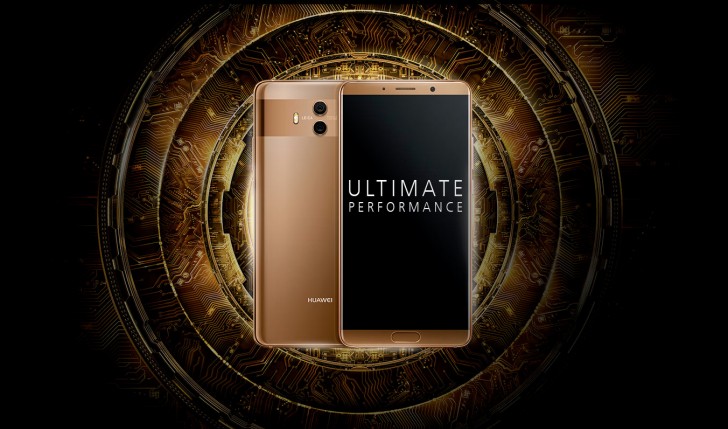 The Huawei Mate 10 will launch later this month in several markets for €700.

I used my bros Ascend Mate 7 and it was poo-poo, his Mi Mix replacement is nice though.