With all the rumors about Huawei's upcoming flagship phablets lately, we still know nothing about prices. Well, thanks to a fresh new report, that gap in our Mate 20 and 20 Pro knowledge is now fixed.

The pricing list contains other phones as well and comes in Swiss francs. Also, note that these prices are from the local distributors to retailers so the end customer will end up paying a few bucks extra. The regular Mate 20, for example, ships for CHF 799 or in other words - $806 for the 128GB version coming in black, blue and twilight colors. This means that the end pricing will be hovering between $850 and $900. 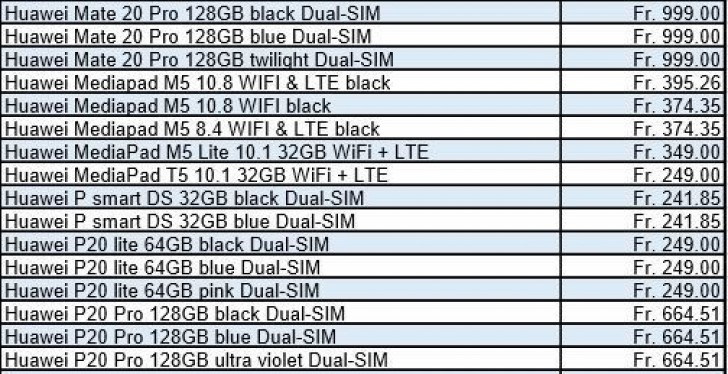 Another important thing to note here is that the prices are obviously for the Swiss market so they will probably apply for the rest of Europe as well. We will see for sure during the October 16 event in London.

lol..I bet you were hoping it would be cheaper so you can leave Apple..Huawei is here to stay folks and I will be upgrading from my Mate 10

I was waiting to buy a new phone, and I am sold by Huawei. I currently have the Mate 10, but the Mate 20 definitely is an upgrade. I am glad they kept the IR blaster, and hopefully the desktop mode with just a hdmi-usb c cable

Yeah lol so true. It's an irreversible burden.