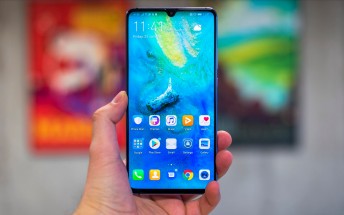 Over the past couple of days, the Huawei Mate 20 X 5G has made headlines as Huawei prepares at least two 5G devices for this year. After seeing a photo of the 5G version’s retail packaging, a hands-on video of the device has been uploaded to YouTube on Friday by Zing Gadget.

The video has a few angles of the Mate 20 X, prominently featuring a 5G logo on its backside. The specifications in the captions mention the two spec differences initially rumored earlier this week: the smaller 4,200 mAh battery, and the quicker 40W Super Charge support.

Both the foldable Mate X and the huge Mate 20 X 5G will use Huawei’s own Balong 5000 modem, which is already compatible with the HiSilicon Kirin 980 SoC and will require more physical space within the Mate 20 X, which is presumably why the battery is reduced to 4,200 mAh vs the standard 5,000 cell in the 4G version.

All other specs on the Mate 20 X 5G should remain the same. A bright and large 7.2-inch display, 8GB of RAM, and the triple camera setup identical to the one on the Mate 20 Pro. Huawei hasn’t mentioned availability of a 5G Mate 20 X but the foldable Mate X is supposed to arrive sometime in the second half of this year.

Our Huawei P30 video review is up

Hopefully they can bump it back up to 5k or more on the M30X. I think 5g is a game changer but till the states roll it out my M20X is the best phone I've ever had.