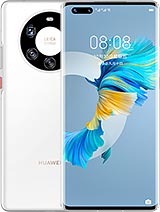 If this phone would be cheaper and front cameras would be in the middle of the screen (not on the left or right edge), then.... yeah. Definitely I would buy it :)

AnonD-961600, 01 Mar 2021The more copper cooling used the better for keeping heat do... morethis is very powerful with right cooling and optimisations since its Mali it woukd been significant faster than exynos snapdragon and a14

Anonymous, 17 Feb 2021got a mali g78 mp24 24 cores = 2300 gflops up from 9... moreThe more copper cooling used the better for keeping heat down.
Don't blame Mali but the OEMS who refuse to spend £££ because copper cooling is expensive.

Anonymous, 28 Feb 2021huawei is pretty much overcharging just like apple. they ov... morelook at its porsche design, so much higher price than next model.

AnonD-973296, 01 Feb 2021dude the vanilla mate 40 is $1099, what makes them worth th... morehuawei is pretty much overcharging just like apple. they overpriced their phones so much that they pretty are in their own league already. (look at the mate x2)

I don't care about gms.this phone is amazing and worth the price.

snapdragon 888 tops out 1700 but sustained is higher

f**k GMS, the more tantalizing question is when will this be released in the Philippines and other markets? @_@. This is the only phone so far the meets what I need like great all around camera and exceptional performance except for the lack of GMS really. Ugggh, Ive been waiting since 1 yr ago, only to be disappointed by the lack of variant color for the P40 Pro+, and now the Mate 40 pro+ to which seemingly won't be released here. -_-

Anonymous, 13 Feb 2021An amazing phone with amazing specs, but it is sad that the... morewhy do you need somebody to spy on you

An amazing phone with amazing specs, but it is sad that they don't have Google services.

OhNom, 05 Feb 2021yes, it is a very interesting rumor, they were supposed to ... moreIm guessing that the liquid lenses is from the Norwegian company PoLight.
They are hiring people, and ramping up production of there TLens,
The TLens better than the traditional VCM and is possibly going to replace it in the entire industry.
polight.com

https://youtu.be/tOEyxavTiGw A sample of how it will work

I know vanilla is UFS 3, but mention SFS to say why the difference in cost between vanilla and the pro and the pro +

OhNom, 04 Feb 2021The ceramic body, the 240mm 10X periscope, and SFS 1.0 must... morehey aren't there rumors(?) that they are going to use some liquid in the camera in the next mate/p that could potentially match the focus time as the naked eye.

oh and the vanilla one has UFS 3.1 not SFS

The Apple iPhone 13 will get a much more powerful ultra-wide-angle camera.

that the ultra-wide-angle camera of all four iPhone 13 models will receive a massive upgrade, namely in the form of a much more powerful lens that could improve the image quality in low light by 1000%.

Because the ultra-wide-angle camera should have a lens with an aperture of f / 1.2 instead of just f / 2.4 for.

The jump from f / 2.4 to f / 1.2 corresponds to almost a complete aperture, so that the lens could capture almost twice as much light. In practice, this means above all that in low ambient light, significantly more detailed, lower-noise images should be possible. 85mm.