Although Huawei didn't introduce any new smartphones during this year's CES in Las Vegas, the company did bring something else to US shores - the MateBook 13 and the MediaPad M5 Lite. Both devices were introduced back in November and September, respectively but this is the first time they hit US shores.

Let's start with the more exciting MateBook 13. The laptop is a direct successor to the MateBook X 13-inch but boasts new hardware and improved design. It's positioned between the MateBook X Pro (14-inch) and the MateBook D (15-inch) and should satisfy your traveling needs as it weighs just 1.280 kg while shaving off a significant amount of bezel. Huawei claims that the screen-to-body ratio is 88%. Not too shabby. 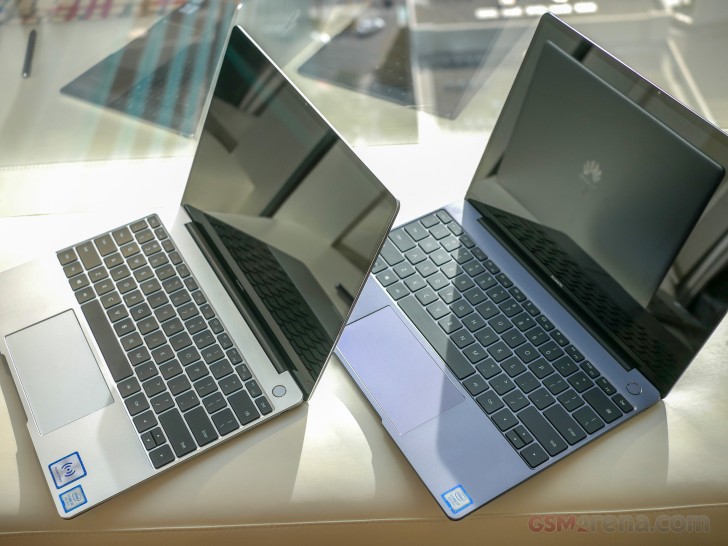 It's also important to note that the Chinese version is stripped from the touchscreen functionality while the US variant does indeed offer it.

The build itself is once again impressive and it's precisely what we've expected. An aluminum alloy chassis makes for a rigid construction while the edges are chamfered with CNC diamond cut technique. The paint is applied with advanced sandblasting process. 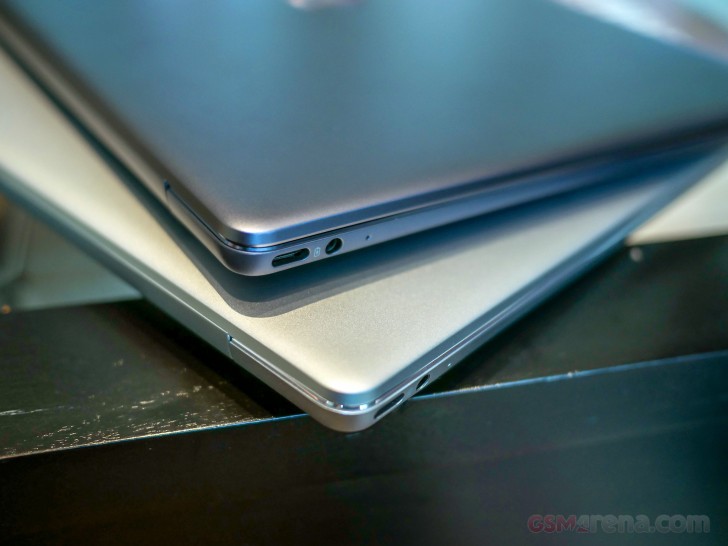 Onto the hardware, the MateBook 13 comes with a 2160 x 1440 pixels resolution IPS touch panel in an unconventional 3:2 aspect ratio in a 13.0-inch diagonal. More importantly, the display covers 100% of the sRGB color space, boasts 1000:1 contrast ratio and peaks at around 300 cd/m2 brightness. It certainly looks great. 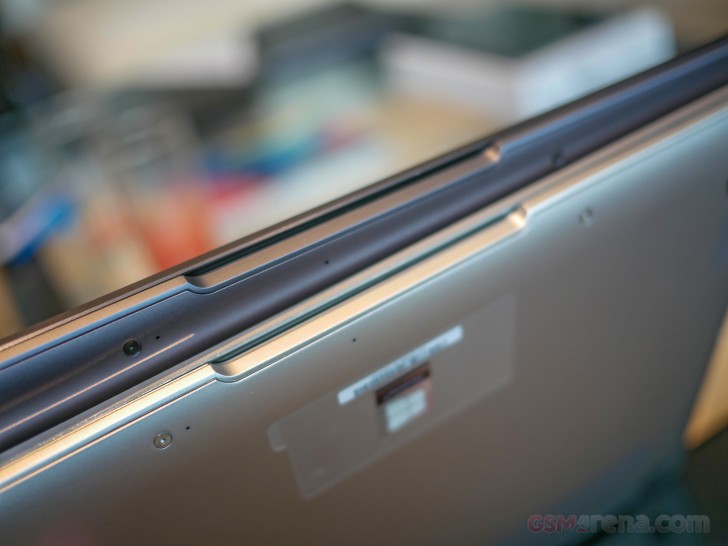 The laptop sports Intel's latest and greatest Core i5-8265U Whiskey Lake-U CPU with integrated Intel UHD Graphics 620. That's, of course, the base model. The Core i7-8565U variant will give you discrete GPU - Nvidia GeForce MX150 with 2GB of GDDR5 VRAM. The base model comes with 256GB PCIe NVMe SSD while the more expensive alteration sports 512GB of the same. However, memory is limited to 8GB of LPDDR3-2133MHz (soldered). 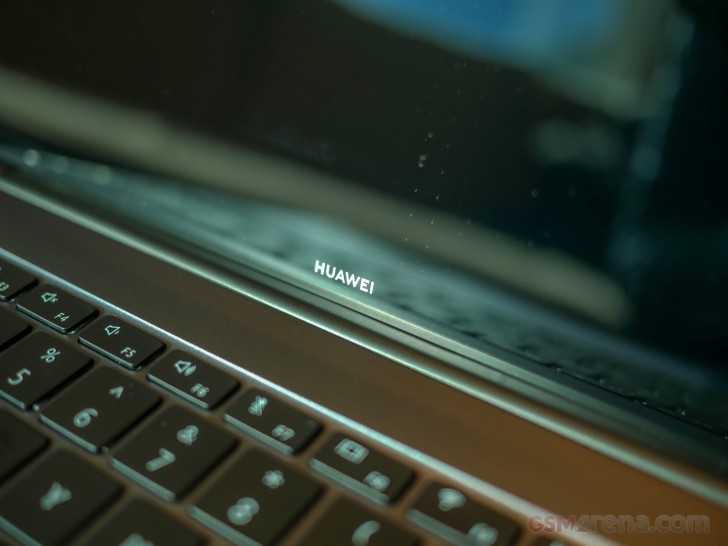 Huawei promises good cooling performance thanks to its Huawei Shark Fin 2.0 cooling - the fans can go up to 8000 rpm delivering 25% more airflow to the internals compared to a standard solution.

Connectivity is rather limited - just two USB-C ports and a 3.5mm audio jack. One of the USB connectors is used for charging and data transfer while the right port is limited to data transfer and doubles as a DisplayPort. Unfortunately, we have no word of the exact USB specs, but we hope those USB-C connectors are Gen 2 (up to 10Gbps) to the very least. 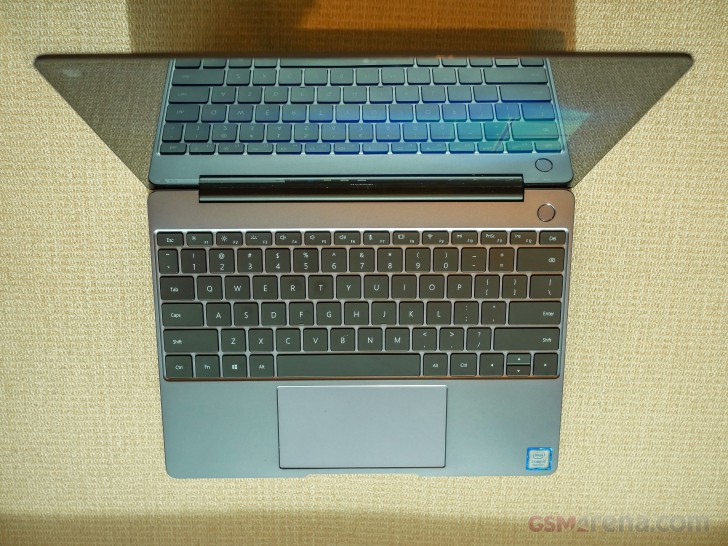 The battery is rated at 41.7Wh and Huawei claims it can go up to 10 hours of Full HD video playback. Fast charging is also on the menu and the manufacturer says you can do around 2.5 hours of office work in return for just 15 minutes on the cord.

The whole package fits in a 15mm thin chassis, which is just a few tenths of a millimeter thinner than the new MacBook Air. Yet, it's somewhat heavier and thicker than the MateBook X 13 when placed side by side. At least that's what we felt in person.

Also, the speakers are downwards-facing, unlike the MateBook X Pro. The latter has noticeably better-sounding speakers and are louder as well. 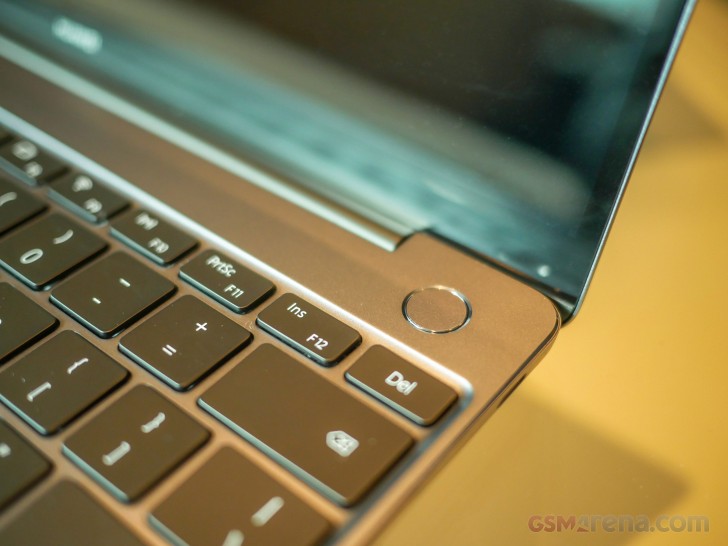 Other cool features include a power button which doubles as a fingerprint reader. The trackpad is quite big, feels clicky and it's quite accurate while the full-sized keyboard (without a numpad, though) is spill-proof. The latter feels just like the rest of the MateBooks - it doesn't have a lot of travel but it's got a pleasant and clicky tactile feedback.

With recent privacy concerns over Huawei products, the company decided to use a third-party chip for storing the biometric security information and has also gone the clean Windows experience path with a pure Windows 10 installation without any bloatware. 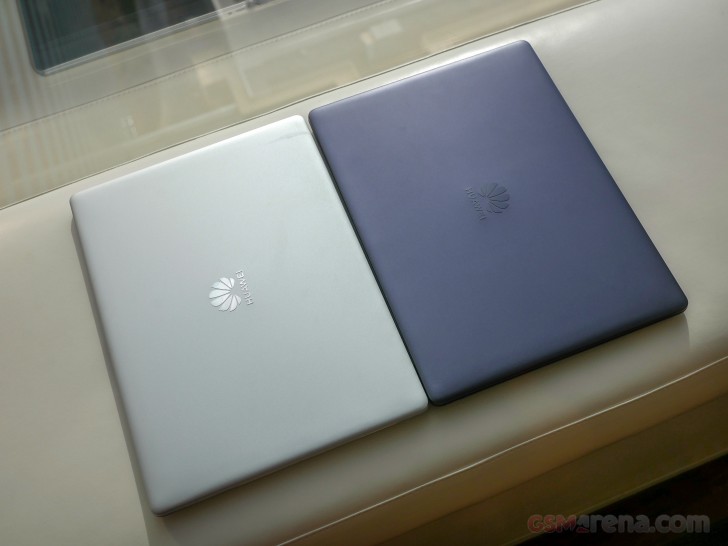 The laptop is expected to launch in the US starting January 29 and in Europe "soon after". The price tag of the base model is $999 and goes up to $1,299 for the Core i7 + discrete GPU variant.

And as for the MediaPad M5 Lite, it carries familiar hardware - Kirin 659 SoC sits behind the wheel with 3GB of RAM and 32GB of internal storage with up to 256GB microSD card support. The display is 10.1" with 16:10 aspect ratio and 1920 x 1080 pixels resolution. It also launches with Android 8.1 Oreo out of the box with Huawei's own EMUI 8 on top. 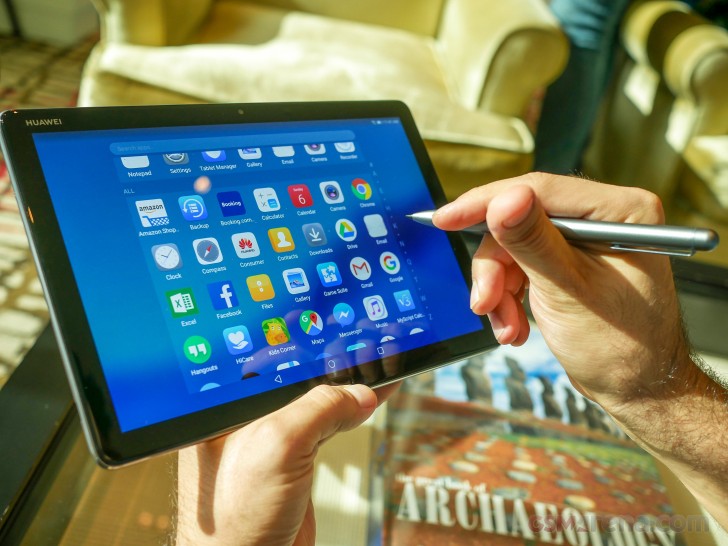 We also have a big 7,500 mAh battery that charges over USB-C. Multimedia isn't left out either - quad Harman Kardon-tuned speakers make for a good multimedia experience. An M-Pen (stylus pen) comes along in the box, which is a bonus at this price point. Besides, 2040 pressure levels are more than enough although, the overall feel when using it on the touchscreen isn't anything worth noting.

The tablet will be made available starting at the end of this month for $299.

10 Mbps usb, I mean why hope for anything if that's you're ambition.

Weird thing is when RAM is going to DDR5, this one is still using the aging DDR3