The thinnest and lightest 11-inch tablet, Huawei calls the MatePad Pro 11, and they're right on both counts, if only sort of on one of them. The 5.9mm thickness is a shared record with a bunch of iPad Pro 11s, but we'll allow it. The 455g weight, on the other hand, is indeed the lowest number for an 11-inch slab, even including a couple of 10.9-inch iPad Airs (the 2020 and 2022 model year versions). 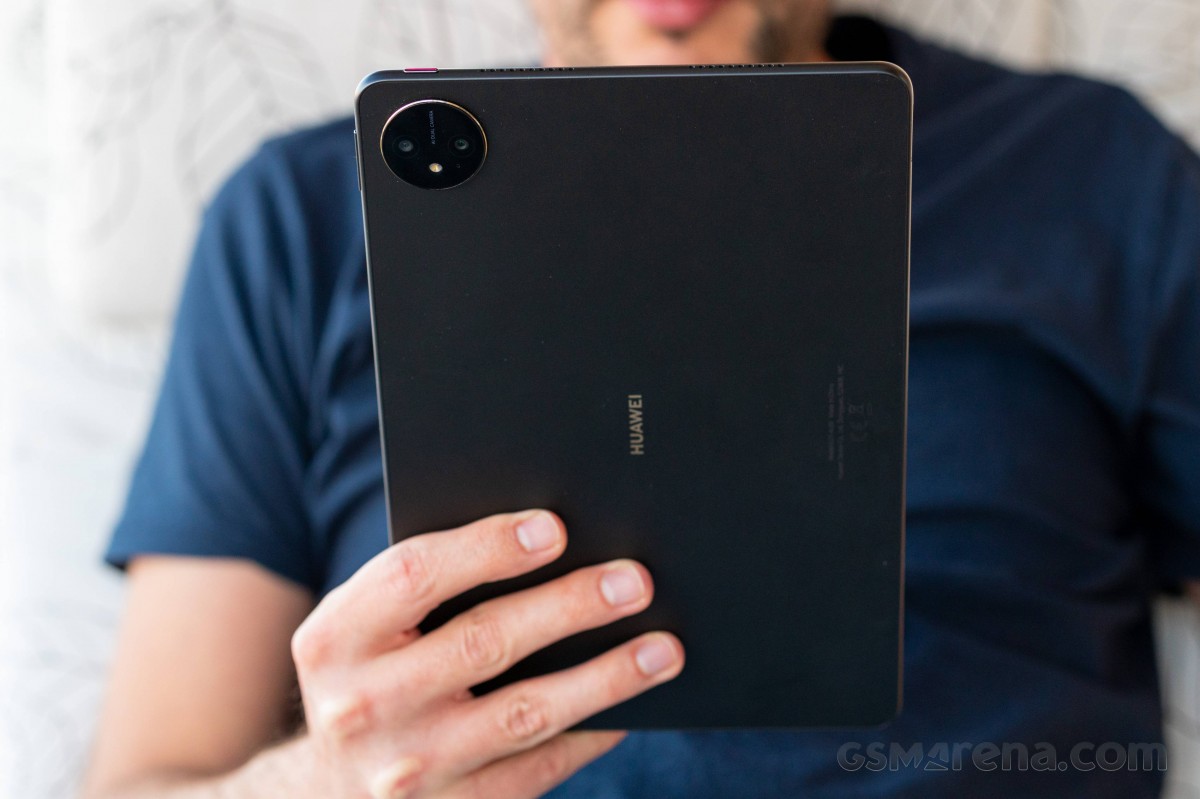 Technically, the Wi-Fi-only version of the tablet is even lighter at 449g, but since the heavier LTE-capable variant is already lighter than all the other 11-inchers, the record stands for both versions.

We reckon Huawei would have come up with a superlative claim for the bezels around the display, had they actually been 'the thinnest', so we'll stick to calling them some of the thinnest we've seen - that they certainly are. 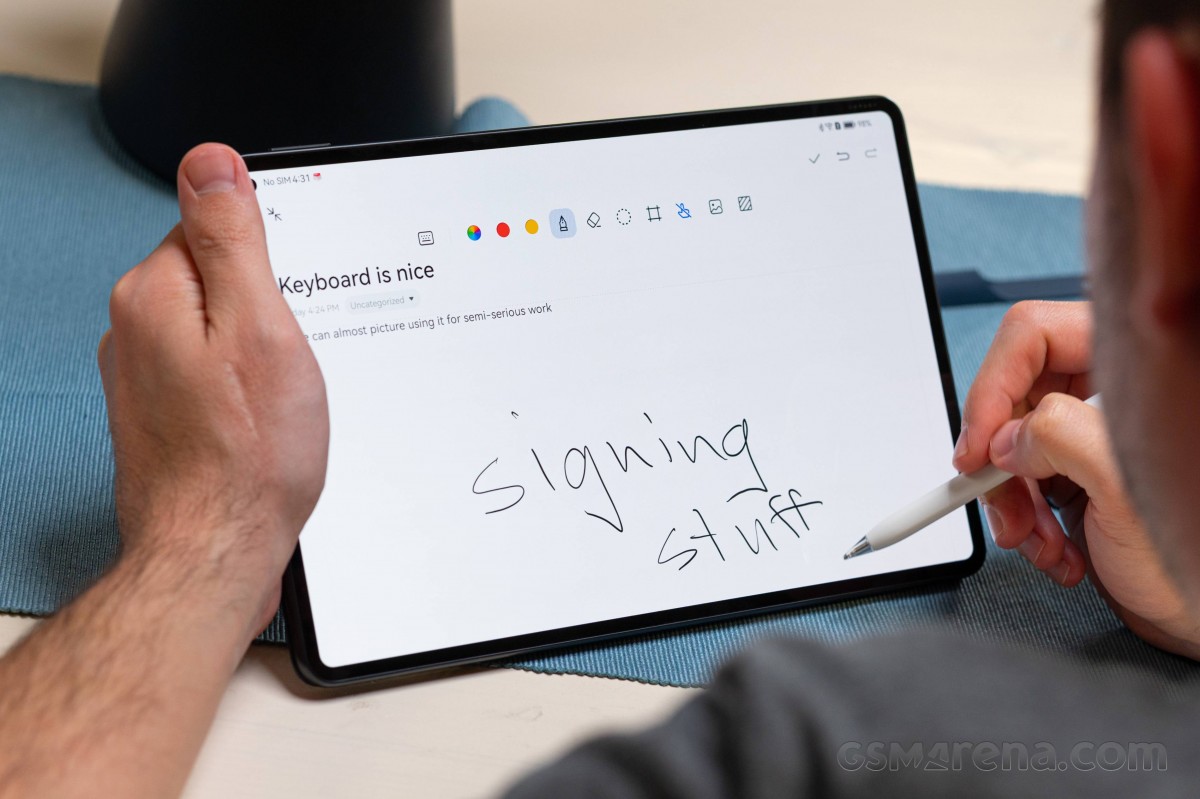 The back panel of the MatePad Pro 11 has a shimmery frosted finish, and even though Huawei does not specify materials, we went in with a knife blade and it left no marks so we concluded it had to be glass. It's the only color option for markets outside China and it goes by Golden Black, while China gets three more to choose from. The Golden part of that name marks the accent color, found on the Huawei logo and the ring around the camera. 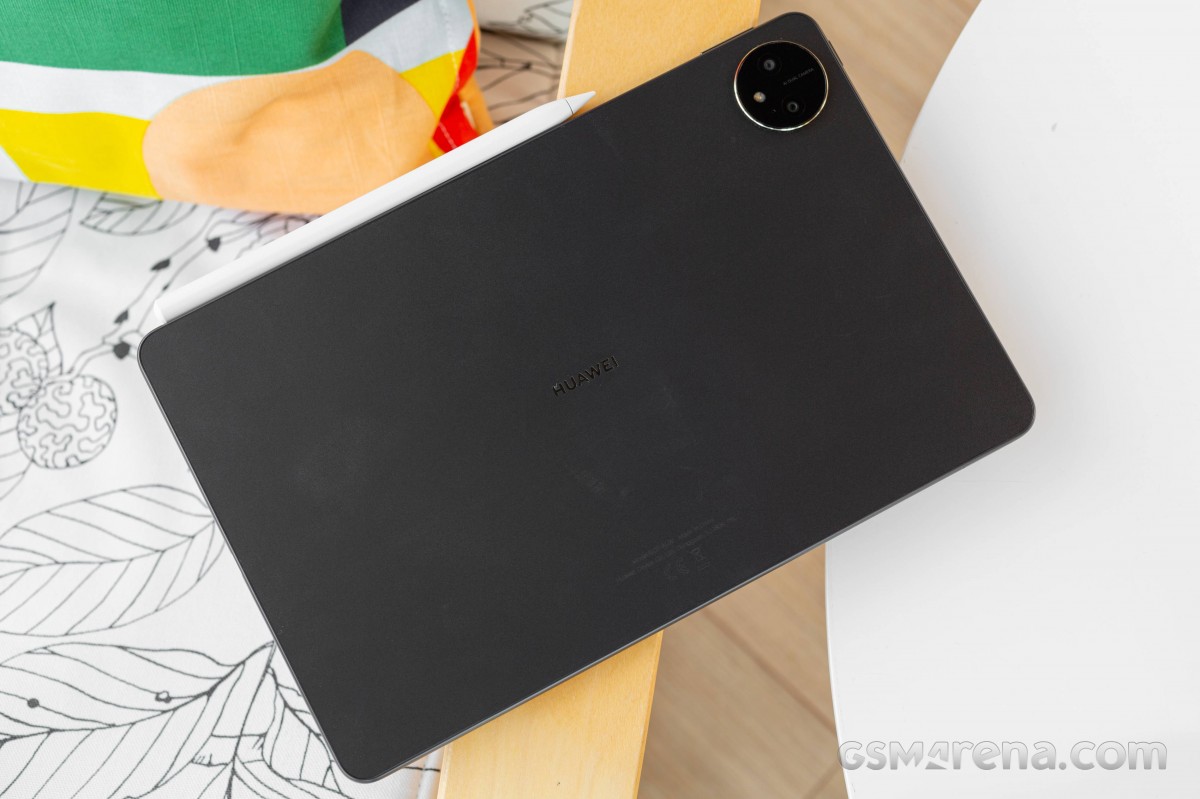 The same blade test implied that the frame is aluminum, but some pretty hard polycarbonates exist, so we're less comfortable making any statements there.

The physical controls are grouped in the top left corner when holding the tablet in landscape, in the correct orientation - with the selfie camera punch hole in the same top left corner.

Using that same frame of reference, the SIM card slot is on the bottom of the tablet, at the very left end.

The tablet is comfortable to hold thanks to the relatively low weight, while the slim profile makes for a nicely premium feeling. The slim screen bezels didn't appear to get in the way of usability and palm rejection worked really well in our use.

The MatePad Pro 11 has a couple of optional accessories - a redesigned M-Pencil stylus and the tailor-made Huawei Smart Magnetic Keyboard. In China, you can buy bundles of the MatePad with either one or both add-ons, but they are, after all, separate products.

The keyboard is particularly interesting as it's not your everyday folio keyboard case. It's a two-piece design, with one half attaching to the tablet's back, while the actual keyboard portion is separate. All 'physical' connections - tablet to back, back to keyboard, and tablet bottom to keyboard use magnets. 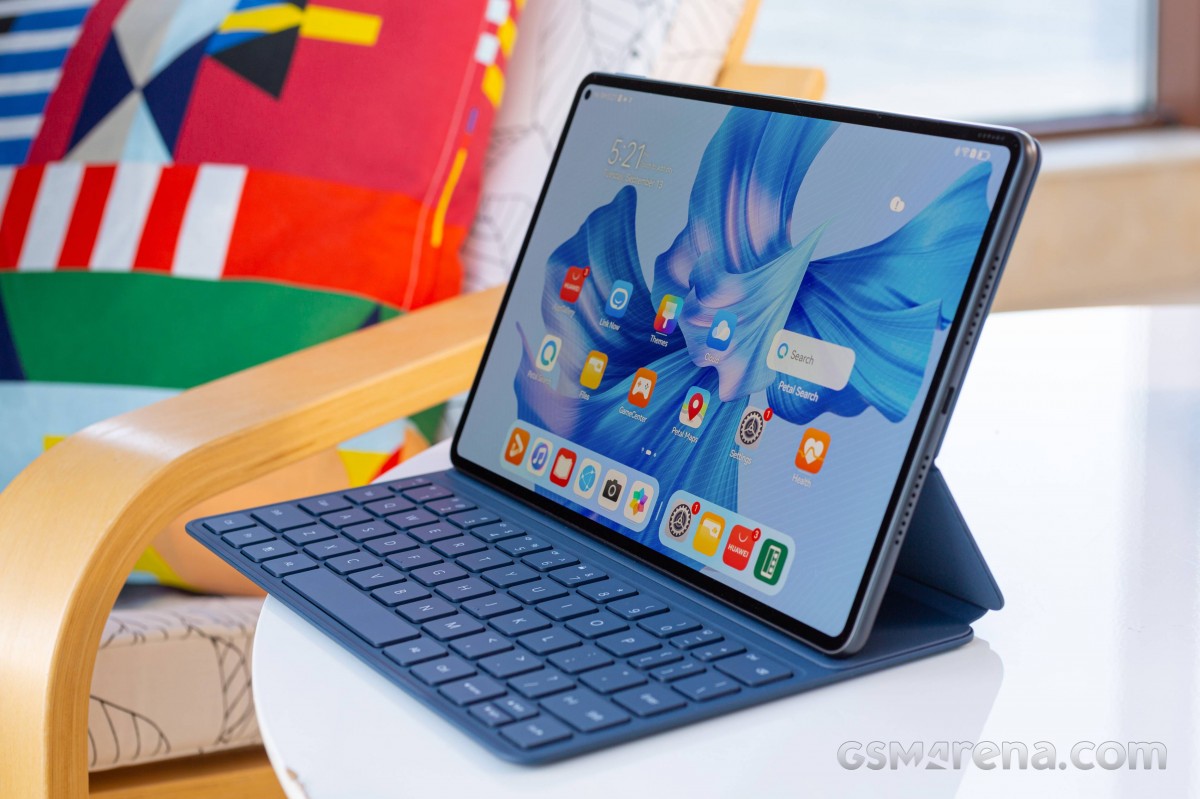 The back draws power from the back of the tablet wirelessly and supplies it to the keyboard via a couple of pogo pins - that's how the keyboard's battery charges. It connects via Bluetooth, so you can type on it even when it's not physically attached to the tablet. 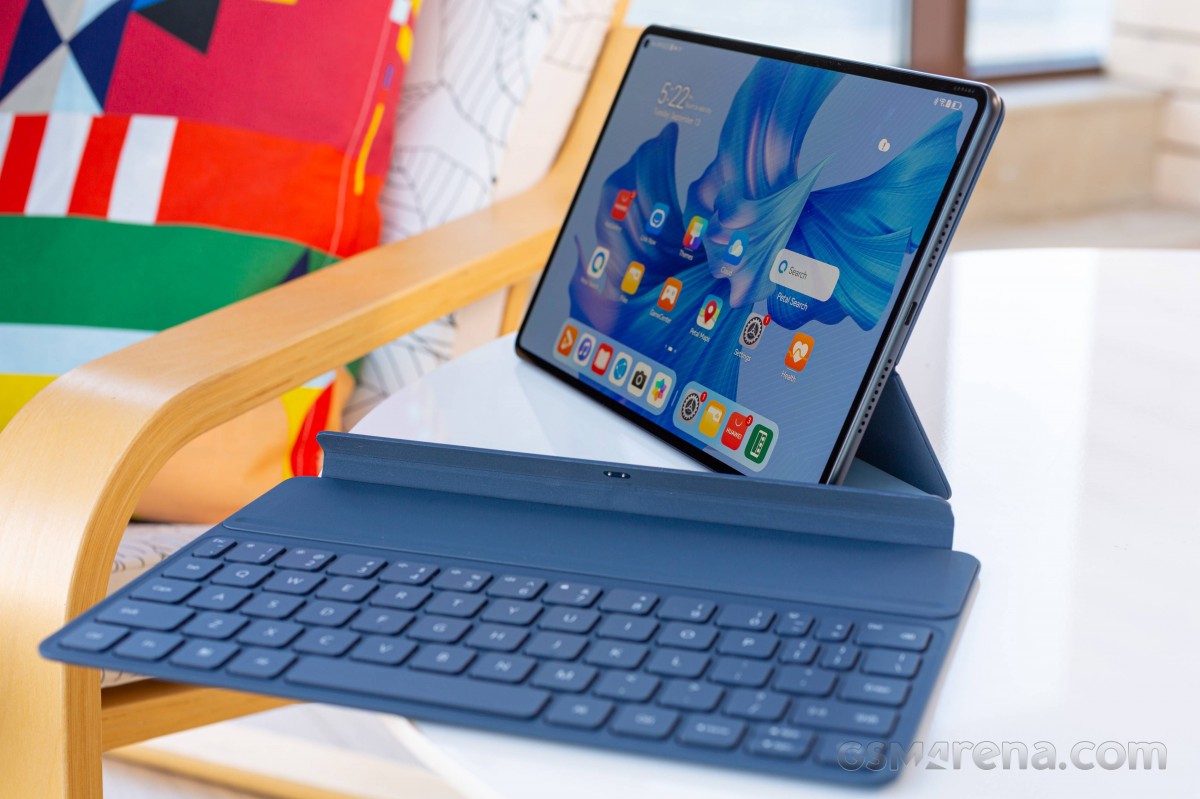 The tablet back portion, on the other hand, has a hinge-like strip running along its length allowing it to double as a kickstand. In fact, it allows you to rest back the tablet at two different angles, the wider of which makes it easy to draw stuff on the screen.

Additionally, Huawei says it uses the keyboard folio as an antenna booster to amplify the Wi-Fi signal reception, but we couldn't test that particular aspect. 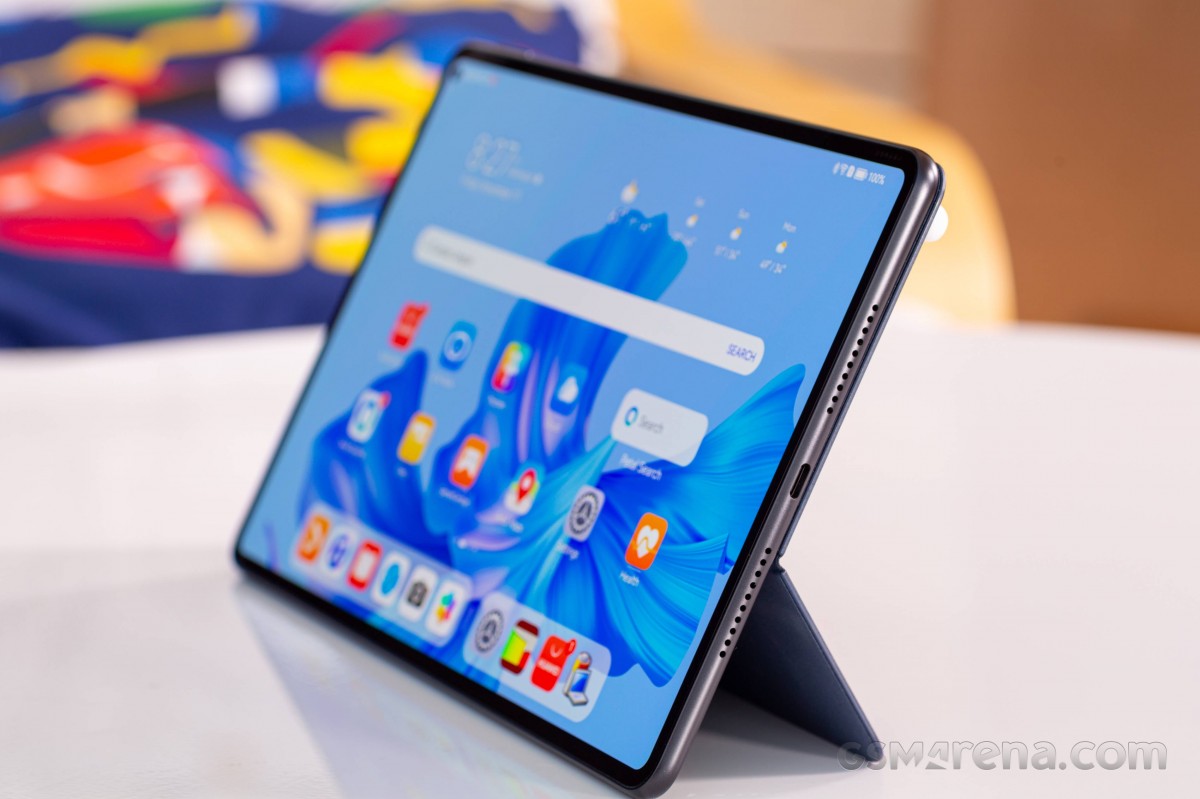 The actual keyboard has 15mm chicklet keys with 1.5mm travel and is perfectly usable for typing on the go - even some of the keyboard snobs around the office gave it the thumbs up. 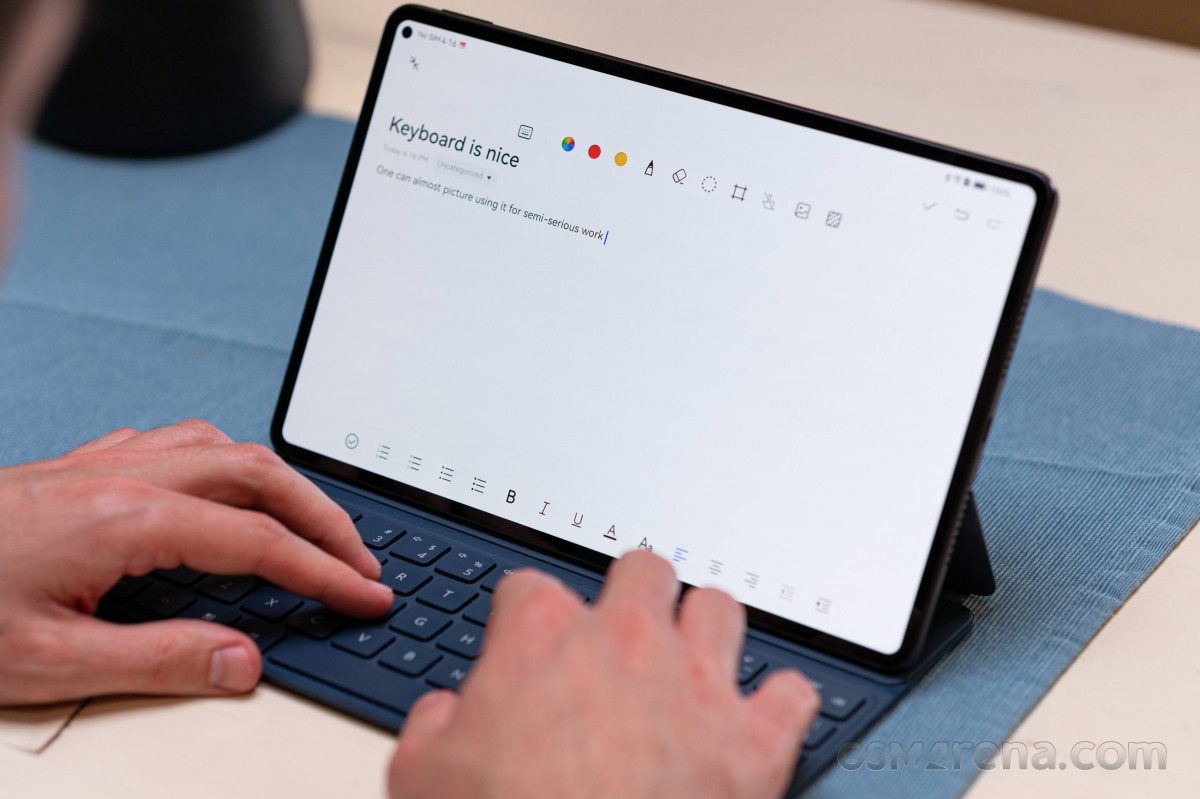 We then get to the M-Pencil. This second-generation design is matte white as opposed to shiny silver and features an optional transparent tip that gives in under pressure from your hand just enough to make it feel as if you are writing on paper.

The stylus can attach magnetically to the top of the tablet, which is also how it pairs with it - though attachment works at several points, while pairing can only happen in this specific position. 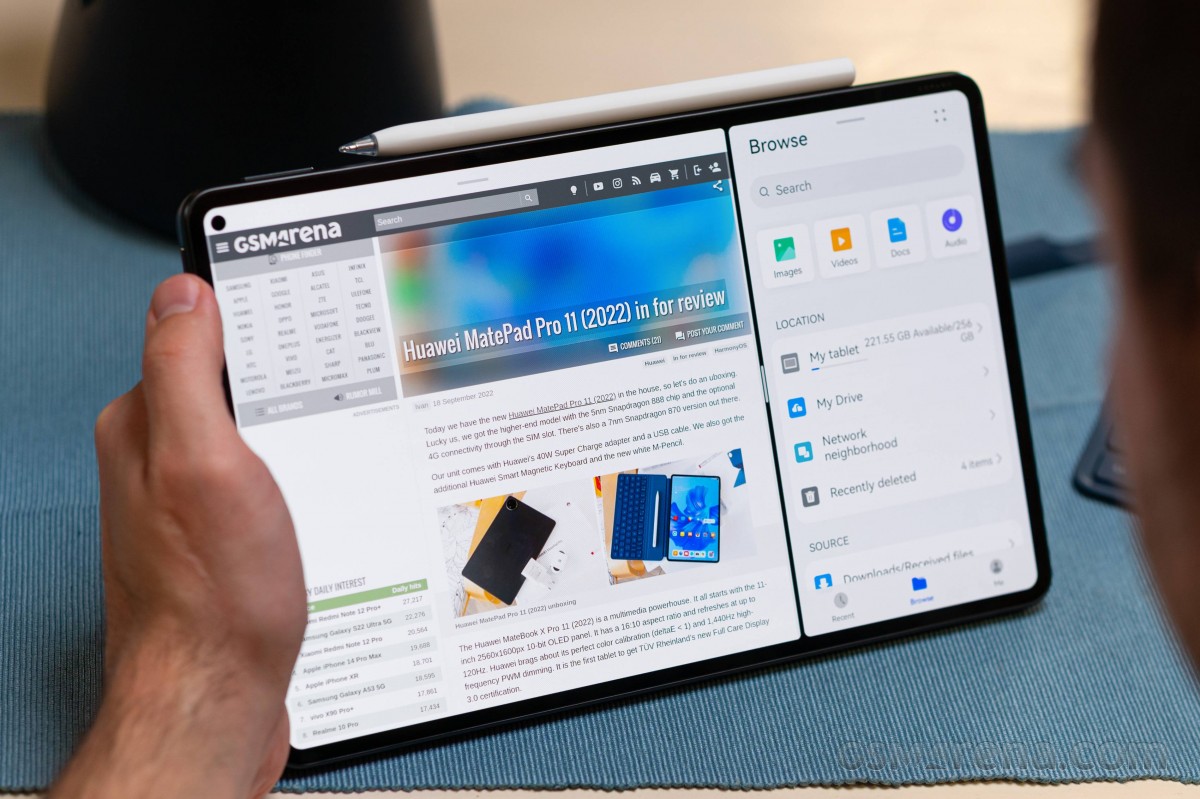 There's also a soft silicone holster that attaches magnetically to the back of the keyboard cover plus it hooks onto the metal Huawei logo on the back. This means the holster won't come off from any off-axis action while you take out the Pencil. It's still easy to brush off accidentally while taking the tablet in or out of your bag so be mindful of that. 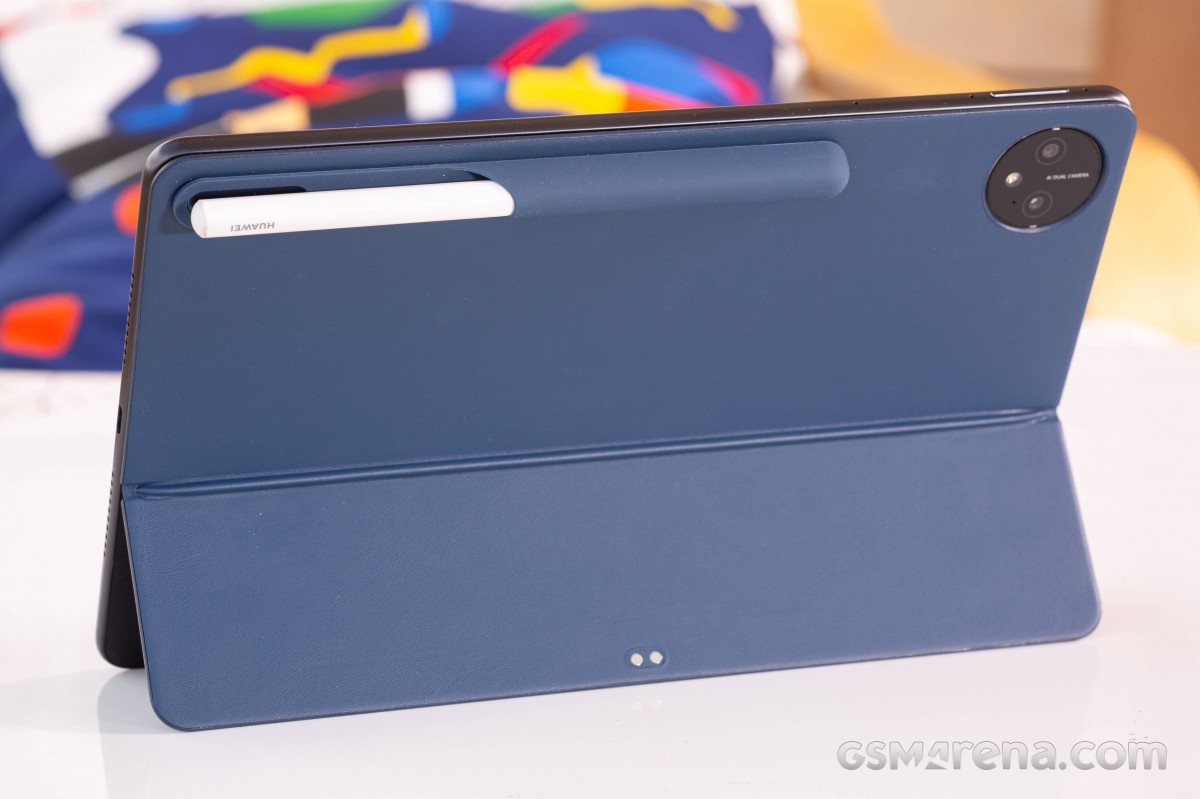 The M-Pencil works brilliantly. Each UI element has feedback to show it detects the stylus as soon as you hover over it which translates into a very positive and responsive user experience. 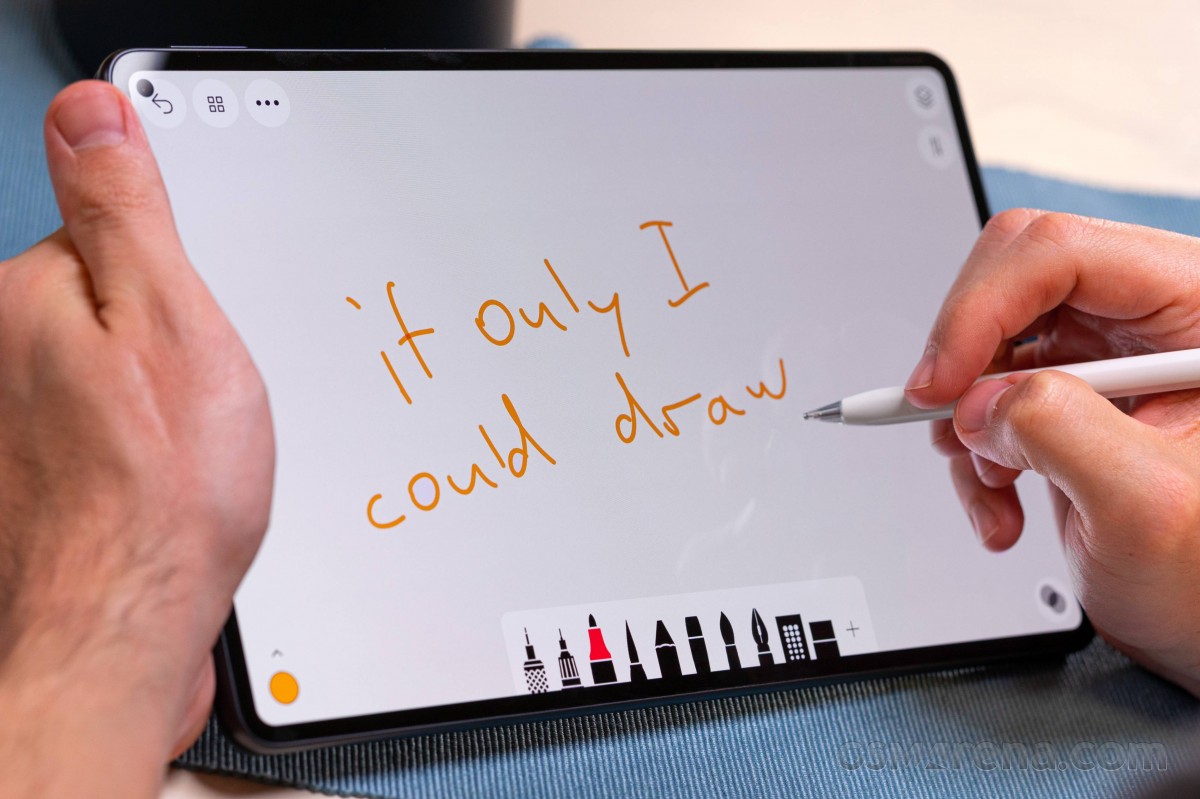 Nobody makes hardware like they do. If you had one iota of engineering knowledge you'd know that (and also the true reason why they were banned, G7 brands could not compete with them).

If you install netflix using gspace you have full L1 drm support.