Huawei Ascend Mate comes with the stock Android 4.1 Jelly image gallery. The Default view of the gallery is Albums, which is what we're used to seeing - it lists all folders in the phone as stacks of photos.

Getting inside an album displays all the photos in a rectangular grid, which is horizontally scrollable. When you try to scroll past the end, the photo thumbnails will tilt to show you that you've reached the end.

When you view a single photo, you'll get Share, Delete and More Settings shortcuts above the photo. You can share a photo via DLNA, Bluetooth, Wi-Fi, Picasa, MMS, Google+, Hangouts, Facebook, Twitter, Email and Gmail.

The settings menu lets you do simple edits to a photo (rotate, crop) or go into a more capable editor with a lot more options. The editor offers light adjustments (so you can bring out the shadows or the highlights), effects, color styles, red eye correction, straightening a photo, sharpening and face glow (which detects faces automatically). Most of these options have a slider that lets you fine-tune the intensity of the effect.

An app called Movie Studio handles editing videos and it's quite feature-rich. You can add multiple videos to the timeline and trim their start and end points, you can add titles and effects (including transition effects) add music and there are multiple options available when you decide to export the video (resolution, quality, etc.).

It's an app that can completely eliminate the need of a computer for most people when creating videos. Plus Apple charges a good amount of money for the same functionality with their iMovie app. Same goes for the image editor too.

Video player is part of the gallery, will play anything

The Huawei MediaPad 7 Vogue doesn't have much of a video player - you just open videos from the gallery and that's that. On the up side, it handled most videos we threw at it - all the way up to 1080p, DivX, XviD, MKV and even WMV.

You get play/pause and a slider to scrub through the video plus different sharing options. The video player UI also offers a lock button to prevent unintended touches as well as a pop-up play mode similar to Samsung's PopUp Play.

Sadly, the integrated video player doesn't offer any equalizer presets. However, you can download a third-party movie player at any time in case you need extra functionality.

The Huawei MediaPad 7 Vogue comes with an app called Music+ that is an updated version of the stock music player. The app is divided into two sections - Local music and Online music. Let's start with the first one.

The Local music tab is straightforward - it shows all the songs that are loaded onto the slate. The Music+ app takes advantage of the 7" display and on the left displays the different song categorization methods: Playlists, Artists, Albums, Folders, Download manager or All songs. On the right, there's a laundry list with all the songs that match the aforementioned filtration.

The Now playing interface features more eye-candy including album art. Below it, the Music+ app will try to automatically load lyrics for the song you're playing.

Interestingly, the Music+ app is missing any equalizer settings, but has some interesting settings options such as sleep mode and hide short songs.

Online music mode uses a Huawei powered service to look for songs online. You can choose to display new songs or bring up music topics.

Online music on the Music+ app

Clean audio output, but on the quiet side

The Huawei MediaPad 7 Vogue delivers excellently clean audio output when connected to an active external amplifier. Its volume levels are lower than we would have expected from a tablet, though so it's can't take an edge over the Nexus 7.

With headphones plugged in, the output quality barely takes a knock - the stereo crosstalk is the only affected reading. Volume levels remain fairly low, though, so the slate doesn't get full points here either. 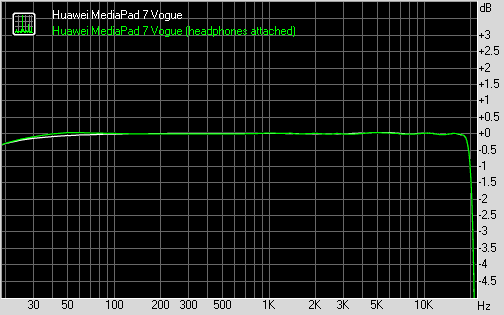 I bought the table MediaPad 7 Voguet, but I can not run on the TV using the Link Micro USB to convert HDMI Is the device supports MHl?