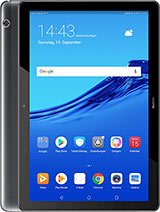 The best tablet that I had.

I also run emulators on It

Sam799, 17 Feb 2021I've been using this tablet for almost a year now, I&#... moreI too have the 16gb version. I have never known anything so slow in my life. Its been like this since new and Huawei say there is nothing wrong with it. Constant delays in loading up websites.

I've been using this tablet for almost a year now, I've the 16GB version & I'm satisfied with it. I use it only for watching movies & sports. I've downloaded loads of movies on its memory card. Since it's internal storage is less so I don't play or instal games on it, the big screen is really great for watching movies although it takes a long time to charge but the battery lasts for hours.

Anonymous, 25 Jan 2021It is the worst tab I've ever had I totally dislike it... morePretty sure the purpose of the tablet is not picture taking. It's called a MediaPad, it's purpose is media consumption which the tablet is very good at.

Nis, 29 Dec 2020Crappy performance, even just scrolling through home, it... moreIt is the worst tab I've ever had I totally dislike it it can't save up to more than 100 pics it has the worst camera just do what I did March up to that store and tell them you want a refund or when a better version comes out the should give it to you for free that's what I did and knowni have the latest matepad sooooo what a re you waiting go
Information for huawei is:STEP UP YOUR GAME COS APPLE IS GONNA GET BETTER SO STEP UP (yelling)

Nis, 29 Dec 2020Crappy performance, even just scrolling through home, it... moreIt is

This phone is the most horrible phone I have ever seen. I wasted an hour of my life trying to download a game and after it was done for some reason it didn't install. This phone is useless. It has very low space although it is so expensive. I am so angry

Steve, 25 Dec 2020A piece of garbage that should never have gone to market. I... moreI totally agree. Pre-loaded apps take up more than half of the memory. If this is the way Huawei is going then I'm jumping ship.

Crappy performance, even just scrolling through home, it's still laggy. Playing apps are worse. The only thing good about it is its 1080p screen but is pretty much considered average. Definitely not worth the 9k php spent. I recommend everybody thinking about buying this not to.

A piece of garbage that should never have gone to market. I can only assume that all the positive reviews on the net are from Huawei employees.

Where to start? A lot of apps from Play Store won't install, let alone run. Apps that do install will fail to load or run so slowly that you lose the will to live - for example, it's taken about 4 hours and 4 restarts just to get Viewranger to open. However it will not load any maps so is utterly useless.

There is clearly an issue with compatibility between Huawei and Google. Huawei has it's own app store, which as you might imagine has a limited number of apps. Had I know about this I would never have bought this tablet. It's basically useless.

The screen is horribly low resolution, not that there's enough processing power to display anything remotely interesting. There's a 5 second delay between touching it and getting a reaction. The internal storage is woefully inadequate because two thirds of it is taken up with Huawei system files and apps.

Disgusting performance, incredibly low memory, awful power options from Huawei that won't let the user change. Can't use VPN and other apps at the same time, it turns the vpn off after 2mins saying it's using too much power, even though I added it as an exception and turned ALL power saving options off. The only good thing about this tablet is the screen but there is a catch too, screen uses 80% of the battery and drains it in 2 hours...

Anonymous, 13 Nov 2020Will never buy anything from Huawei again. Tablets are a jo... moreDon't buy huawei tablets. I'm using one and it's space is soo low even I have deleted everything not needed, but still. Now I have to put a SD card!! 😭

Jimbo, 27 Sep 2020Huawei are scumbags I put a memory card in my tablet when t... moreIt's a good mid level tablet to be honest. And the on board memory limitation is due to Android OS. Try to remove unwanted apps that come preinstall with the tablet.
If you're looking for high end feature tablet, don't be stingy and fork out more money to get one of those premium version.

Jimbo, 27 Sep 2020Huawei are scumbags I put a memory card in my tablet when t... moreWill never buy anything from Huawei again. Tablets are a joke
16g memory and was told can put apps on sd card. You can't. !!!!

Anonymous, 06 Oct 2020just select storage type in app media storage to external c... moreI tried this and storage type can’t be tapped or opened. How did you do it?

Jimbo, 27 Sep 2020Huawei are scumbags I put a memory card in my tablet when t... morejust select storage type in app media storage to external card and all things shall be stored on external from now on.

Anonymous, 14 Aug 2020Internal storage is way too little. What a shyte tablet gggrrrrrrThen don't get a 16GB version. The OS takes a majority of that. Simple.