Huawei listed the Nova 3 for pre-order yesterday, but according to leaked photos, the Chinese company is also preparing a Nova 3i for a launch with Kirin 710, less capable main camera and no quick charging. 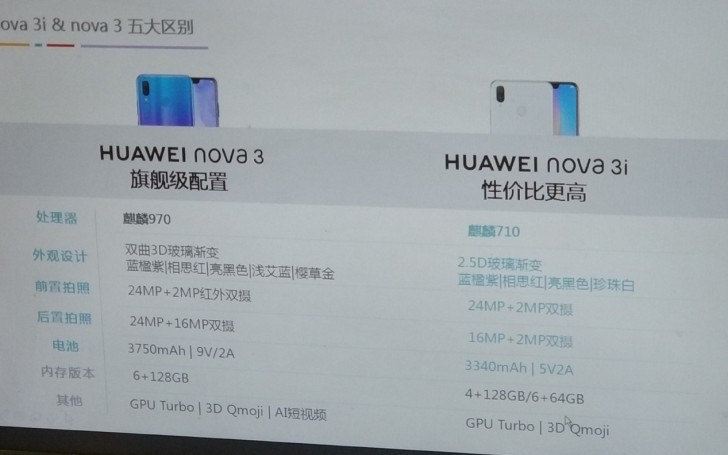 The phone appears to look exactly the same - notched screen, dual camera and fingerprint scanner on the back. The Kirin 710 chipset will likely be the new mid-tier of the HiSilicon portfolio built on the 12 nm process. Huawei promises it will bring the AI features that were initially introduced with the Kirin 970.

The dual selfie camera will stick to the 24 MP + 2 MP setup, but the main combo will have a 16 MP primary sensor and 2 MP for bokeh, instead of the 16+24MP AI camera in the Nova 3. The battery is also expected to be slightly smaller - 3,340 mAh with regular 5V/2A charging. Huawei Nova 3i will arrive with either 4 GB RAM and 128 GB storage or 6 GB RAM and 64 GB storage, which is an unusual configuration, but storage will unlikely be an issue since the Nova 3i will have a hybrid second slot to enable easy expansion.

Yesterday we reported that the Philippines might be among the first markets to see the device althought at that point it was assumed Nova 3i is just a rebranded Nova 3.

Thanks to the leak we know this is not true and Huawei is indeed trying to fill every possible price niche to push even more sales and to catch up Samsung and Apple as the top-selling smartphone manufacturer.

Gartner: Smartphone sales declined for first time ever in Q4 2017

This company becoming like oppo. Why release a new model so close to other model? This is slap in face for those customers who bought p20 lite.

Even old mali450 can playback 4k video, thanks to hardware optimisations. I agree it should be strong enough to be able to record 4k30fps. Considering sd625 could do that years ago, I don't think a powerful GPU is needed for this.