A couple of leaks from multiple sources have revealed details about the Huawei nova 5i. Some suggest that this will launch as the Huawei P20 lite (2019) in some regions, however, several of the rumored specs don’t line up.

The nova 5i was certified by Taiwan’s NCC with 4GB of RAM and 128GB storage, plus up to 512GB extra with a microSD card. There will be a version will 64GB storage as well. 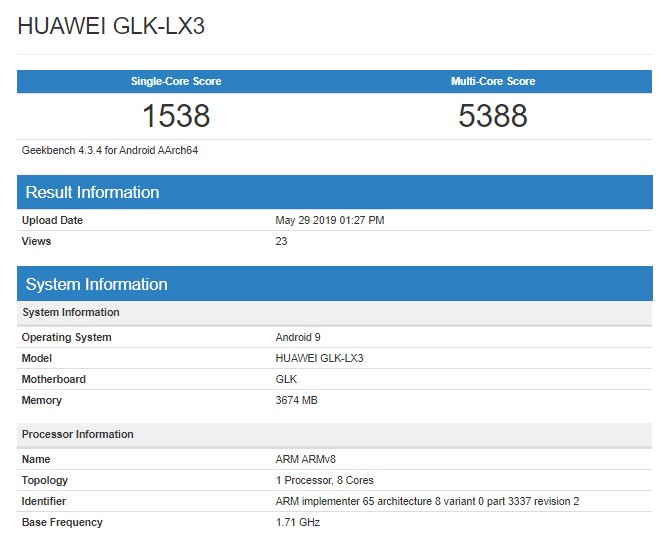 The phone has passed through Geekbench as well, showing a Kirin 710-level score. Huawei may announce the Kirin 720 any moment now and we thought a nova phone will introduce it, but that doesn’t seem to be the case.

From FCC documents, we know that the nova 5i will have a 3,900mAh battery. The NCC info suggests 10W charging.

Memory info from NCC • Battery capacity • The "nova 5i" name

Previous leaks offer more info, however it’s not confirmed by official sources. The nova will have a 5.84” LCD with a punch hole selfie camera. Also, a triple camera on the rear with a 24 + 16 + 2MP setup, along with a TOF sensor.

Huawei may unveil the Kirin 720 tomorrow

Yes because US is a country with biggest loan among all 198 contries in the world. A whole 10 trillion dollars which they cannot pay and bancrupcy of their country is imminent.

US have no evidence I doubt they will find one and I doubt Huawei will win in court, all this is because US wants China to agree to their terms and receive huge fines

Its not very funny and i can guarantee you when USA find no evidence Huawei will send US to the courts and ask for a repayment of all their losses which this stupid ban caused.