Huawei's nova lineup is headed for an update, as evidenced by a render of what is reportedly a nova 6 5G. There are no less than six models in the nova 5 family so we can't imagine this nova 6 5G will be the only one to bear the 6 number, but here's what we can find out about it from this single picture. 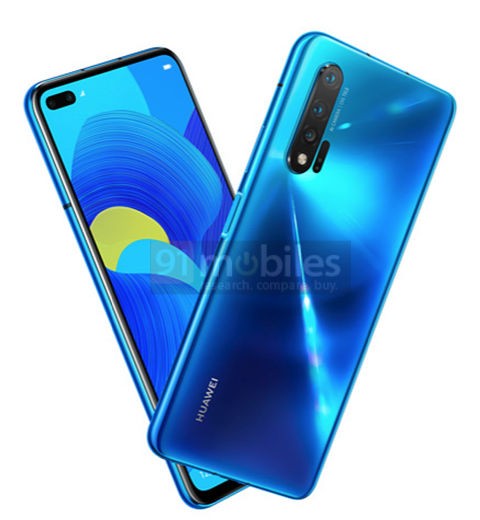 For starters, just like four out of the six nova 5s, the nova 6 5G will have a punch-hole selfie camera. Only this time it's a pill-shaped cutout indicating a dual-camera setup. Whether that's a ToF module next to an actual cam, or we'll be looking at two focal lengths, remains to be seen.

There's a likely a ToF unit on the back, however, next to the cluster of three conventional cameras. The best we can make out of the text next to the camera trio is 'AI camera', but not the specs, unfortunately.

There have been nova 5s with OLED displays, the regular nova 5 and the 5 Pro, but the 6 5G here will evidently pack an LCD. That's a speculation we're basing on the oversized button on the side - it's looking just like the nova 5T's side-mounted fingerprint reader, and if it's an OLED display, an under-display sensor would have made more sense.

That's pretty much all we can think of looking at this single render. Where there's one, there will likely be more though, so we're expecting more info to start cropping up on this new nova in the coming weeks.