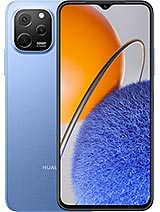 Harold Chen, 04 Nov 2022Maybe this chip is a new kirin710，because the score in Antu... moreWasn't China able to already produce 7nm chips? Why don't Huawei use those for their midrange or entry level phone?

Cookie870, 01 Nov 2022Huawei compete apple by making Android phones look like iPh... moreThis was not designed by Huawei. Just took this trash from someone else and slapped their logo

Huawei compete apple by making Android phones look like iPhones.Wow!
They could redesign P50 or Mate50 but they didn't