Huawei officially announces January 31 launch for Honor 5X in US

Earlier this month, Huawei announced that the Honor 5X will be launched in the US at the end of this month. So, we were already expecting it to go on sale around January 31. Now, the company has officially announced the launch date. 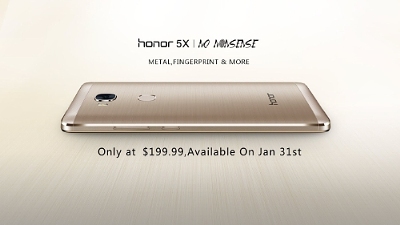 Yes, the device will be available for purchase in the US starting January 31. You'll be able to grab it online at HiHonor, Amazon.com and Newegg.com. As already announced, it will carry a price tag of $200, and will be available in gold, silver, and grey color options.

For those in Europe waiting for the Honor 5X, the phone is expected to land there next week - on February 4.

I was totally prepared to rip on this phone but for $200 even I can't be too critical about it, the specs are rather good except that it's missing WiFi ac and NFC.

Just upgraded to the 3G Samsung Mythic so should be set for several years.

It supports Band 4 1700/2100 so yes it will be compatible with mobilicity. Shame that this device won't be available in canada and as usual price will go upto $400 on ebay and amazon from 3rd party. I myself would like to buy one.