The Huawei P8 is the proud successor to the Huawei Ascend P7, although the company seems a little apprehensive about admitting it. The Chinese manufacturer hasn't quite settled on a naming convention, dropping the Ascend moniker in this iteration.

Huawei can honestly take pride in the aesthetics of its recent creations even if the naming continuity isn't quite ironed out yet. Visually, there is no doubt that the Huawei P8 follows the gorgeous Ascend P7 and the Ascend P6, and has even managed to refine that exterior. 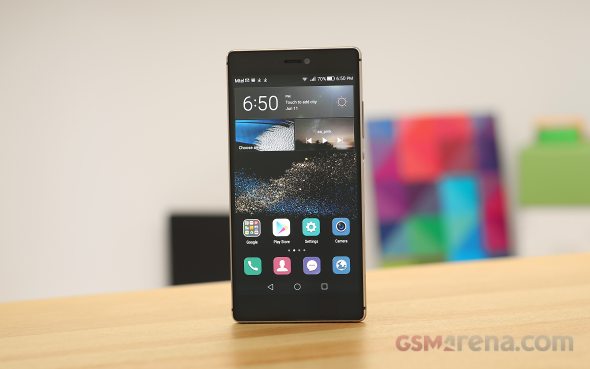 The metal case and the slim profile carry across a distinctly premium feel. The P8 is quite an impressive package but so is its price, especially on international markets.

As usual, Huawei uses an in-house HiSilicon Kirin chipset and this approach can swing both ways. Ending up as the odd one out is definitely a gamble, especially away from China and we are quite keen to see how the P8 fends for itself away from home, against serial hardware and big-brand domination.

The Huawei P8's refined exterior is actually quite sturdy, a testament to Huawei's expertise in making premium-quality handsets. No compromises have been made in this department and Huawei offers amazing build quality in the high-end segment.

We're not quite certain that the brand's name however is easily associated with the premium segment - at least in Europe, but phones such as the Ascend Mate7, the Ascend P7 and the P8 that we currently have here are definitely steps in the right direction.

Huawei's custom chipsets have also failed to deliver high-end performance in the past so that's one thing we'll certainly watch closely. The HiSilicon Kirin 930 chipset seems to match the competition's chipsets architecture but only proper benchmarking will tell whether its performance matches the Huawei P8 steep price tag.

But first, let's see what hides inside the Huawei P8 exquisite retail box and we'll do a tour of the stylish exterior.