The Huawei P8 may run on an entirely new Android version, but, as already stated, MIUI 3.1 has borrowed a lot of its styling and features from its predecessor. The image gallery is one of them. IT still offers a Timeline view, which sorts your images by the date you've taken them. It defaults to the Timeline view, but you can opt for the standard Album view with all of your images sorted in different albums.

The Gallery app • Viewing an image

You can also go into a more capable editor with options for light and exposure adjustments (so you can bring out the shadows or the highlights), filters and beauty enhancements (which detects faces automatically).

It is very intuitive and packed with options, including things like filters, effects, levels and even special watermarks for time, location, weather, food and mood. Every teenager would be pleased with the selection.

When it came to playing videos, the Huawei P8 default player does a good job supporting every common video codec, but unfortunately it lacks support for AC3 audio as is usually the case with most Android phone anyway.

We couldn't find a way to load subtitles, but Dolby Mobile enhancement is supported. Not much else, however, is available in terms of options and the player seems kind of basic. It still works great though.

The Huawei P8 comes with Huawei's custom music player app. It offers four default playlists - songs, artists, albums, folders. You can create your own playlists, too.

The Now Playing screen is pretty standard, it offers album art and lyrics. There are no equalizers to speak off, but the app does have a few extra features. It would try to pull album art, song info and lyrics automatically for you.

Another nice little touch is the ability to filter the songs by length, so no pesky ringtones show up in your library.

The Huawei P8 has a built-in FM receiver. It can play through the headset or the loudspeaker, but you'll need to have the headset plugged in as it serves as an antenna.

We were disappointed not to find RDS support - you'll have to name your radio stations by hand.

The Huawei P8 showed impeccably clean output when connected to an active external amplifier - each and every one of its scores was excellent. Volume levels were only average, but not too far behind the majority of the flagship pack.

Plugging in a pair of headphones didn't cause much trouble either. The only thing to degrade was stereo crosstalk and that certainly wasn't among the worst we've seen. Volume levels were again only average, but we are certainly happy with the overall performance of the slim Chinese flagship.

Anyway, here go the results so you can do your comparisons. 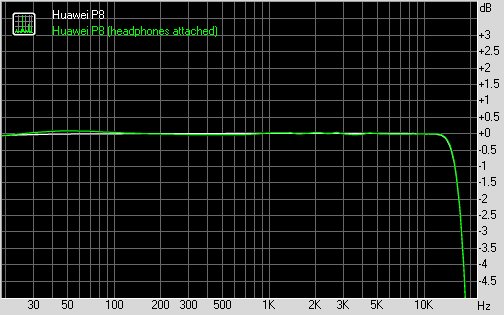