The P9 Lite is currently Huawei's worst kept secret. For whatever reason, the Chinese company decided not to unveil it alongside the P9 and P9 Plus, yet it's been spotted in many places recently. We've seen it offered by a Romanian retailer, and then we got some info about its pricing in Belgium.

Now the Huawei P9 Lite has been listed by a German online retailer, in three color versions. You can pick one up sans contract for €299, or you can grab a plan from a carrier alongside it and pay as little as €4.95 upfront. 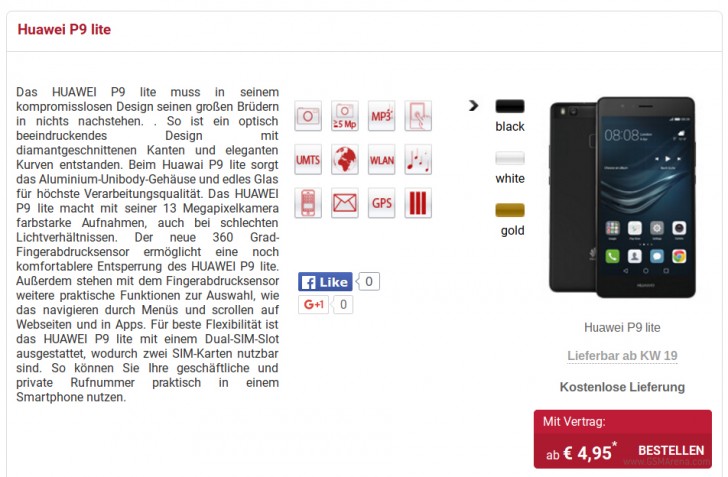 According to past leaks and rumors, the P9 Lite's screen should be 5.2" in size, and the handset will be powered by the HiSilicon Kirin 650 chipset, aided by 2GB of RAM. A 5 MP selfie camera and a 3,000 mAh battery should also be present.

If you're in Germany and order one from the Source link below, do note that deliveries are set to start during the 19th week of the year. That starts on May 9 and ends on May 15.

Thanks for the tip, Sascha Howlett!

Totally agreed with you bro.. P9 lite is not worth of money

I assume is the release price, it will drop in a few months but yeah, the G4 is a bargain.

Kirin chipset, I wished they released snapdragon version too