As part of its “Summer 2022 Smart Office Launch” Huawei unveiled a new 11” MatePad Pro tablet. It advertises it as the world’s thinnest and lightest 11” tablet, measuring just 5.9mm and weighing 449g.

This requires an asterisk, though, as the iPad Pro 11 from last year also measures 5.9mm and there larger Samsung tablets that are thinner. The weight of 449g is unbeatable at this size, however.

In the announcement, CEO Richard Yu mentioned a 5nm Snapdragon chipset. However, the spec sheet on the official site lists two models – one has the Snapdragon 888 (indeed a 5nm chip), the other uses a Snapdragon 870 (7nm). There are a few other differences, but we’ll get to that.

The tablet utilizes 3D graphene and a vapor chamber to keep the chipset cool. The chipset will be paired with 8 or 12GB of RAM, the storage options are 128, 256 and 512GB. There is optional 4G connectivity, plus Wi-Fi 6 (ax) and Bluetooth 5.2 with AAC and LDAC for audio. The USB-C port offers 3.1 Gen 1 speeds.

The tablet runs HarmonyOS 3.0 out of the box, which has some neat improvements. One is called Card Folder, which allows you to stack groups of widgets on top of each other, which helps keep the homescreen clutter-free (switching between the groups takes just a couple of taps). Huawei also redesigned the multitasking interface to make it easier to use. You can have two apps side by side and two floating app bubbles.

There is a dual camera on the back, featuring a 13MP main module (f/1.8 aperture, autofocus) and an 8MP ultra wide (f/2.2, fixed focus). The front-facing camera has 16MP resolution. 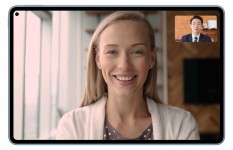 Huawei painted the tablet in a “Golden Black” color, which changes as the light hits it from different angles. The back has a frosted finish, which makes it more wear-resistant and keeps fingerprints at bay.

Time to mention a few accessories. There is a revamped Huawei M-Pencil with a new color (white), better grip and a smoother writing experience.

Also, there is a new magnetic smart keyboard with 1.5mm key travel. The keyboard is detachable if you want to keep it close and the tablet further away. The kickstand of the case is adjustable from 120° all the way to 165°, which helps when sketching things with the stylus. The case has a holder for the M-Pen by the way.

The all-new smart magnetic keyboard and the improved M-Pencil

And here is a neat trick – the keyboard case has a built-in antenna, which turns it into a “Wi-Fi amplifier” (says Huawei), so you get better reception. The keyboard and case will be bundled with some versions of the tablet and will be optional for others.

Finally, a quick word on Huawei’s AppGallery. It is now a Top 3 app marketplace and HMS Core boasts some 203,000 apps. The AppGallery is available on supported Windows PCs too.

Our Huawei MatePad Pro 12.6 video review is out - our first encounter with HarmonyOS 2.0

90Hz screen is enough not to eat battery life

Snapdragon 888 is ridiculous next m1