The Xiaomi Mix Fold 2 is coming sooner than expected – it will be unveiled on August 11 (a day after Samsung’s foldables), according to leakster Ice Universe. Normally Xiaomi teases new launches weeks in advance, so this is a bit of a surprise.

The date is probably no coincidence – Xiaomi CEO Lei Jun will deliver his third annual lecture on the 11th. “I want to talk about something different: everyone encounters setbacks and failures in the process of growing up, how I got out of the trough in life, and what life insights I gained,” wrote the CEO. 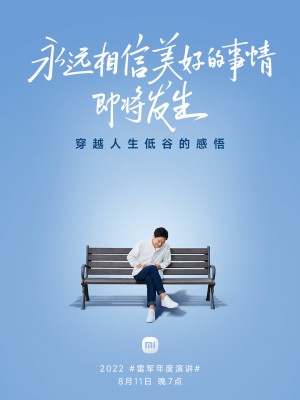 A 21:9 screenshot, allegedly from the Xiaomi Mix Fold 2 • Lei Jun's lecture is scheduled for the 11th

It has 1,080 x 2,520px resolution, which confirms the rumored 21:9 aspect ratio for the phone’s cover display. For comparison, the cover display on the original Mi Mix Fold had a lanky 27:9 ratio.

Also, that display had 90Hz refresh rate, while the new one will go up to 120Hz (according to rumors). This should mean that the internal display will have a 10.3:9 aspect ratio (instead of 4:3 like on its predecessor).

The Xiaomi Mix Fold 2 will be powered by the Snapdragon 8+ Gen 1 with 12GB of RAM and 512GB or 1TB storage. It will support 56W fast charging (same as the original). It may not be the only new phone on Thursday as there have been leaks of the Xiaomi K50S Pro as well, Xiaomi's first phone with a 200MP camera.

Xiaomi will unveil its first car prototype in August

i dont think so. the first folded phone was motorola razr

and the best selling among its foldable kind i guess

One would swear Xiaomi has been taken over by Huawei 🤔