Facebook Inc was restructured into Meta yesterday and virtual and augmented reality will be a major focus going forward as the future of how people connect with each other. It’s not going to be all about AR/VR headsets, though, the company appears to be working on a smartwatch.

The image below was discovered in one of the iOS apps, reports Reuters. It’s a squircle-shaped watch, its display has rounded corners and a notch for the front-facing camera. Yes, a camera on a watch. 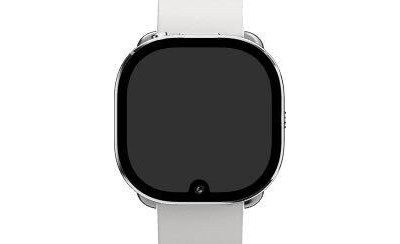 The image was found in the app for the Ray-Ban Stories, the camera-equipped smart glasses that Facebook, sorry, Meta, co-created with Ray-Ban, so there will be some connection between the watch and glasses.

Anyway, video calls is another possible application for the watch, though holding your hand up for long isn’t going to be ideal (and if you rest it on the table you get that awkward up-nose framing).

Previous reports of the watch claimed that the focus will be on health and messaging. There could be other uses too, e.g. as a controller for Meta’s VR headsets.

An insider said that there are three generations of watches in the works with the first one probably coming early next year. One of the later models could feature those detachable cameras we heard about. The watch should have LTE connectivity, allowing it to work without a phone, the price tag will be around $400.

Facebook smartwatch in the works, will have detachable cameras

How is that huge? Have you ever held a watch in your life?

Who's gonna buy one? Esp from a company that's infamous when it comes to privacy