Infinix is gearing-up for a new device launch. The Hot 10 has surfaced online, from a couple of sources, under the X682C and X682B model numbers. The Google Play Console entry for the phone is quite descriptive. It even features a render of the handset. One that looks very similar to the current Infinix Hot 9. We only get a see the front side of the Hot 10, though. 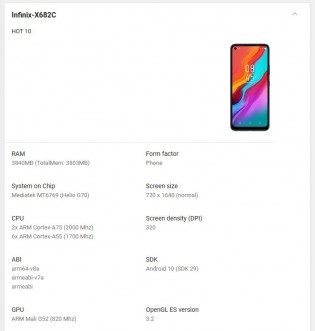 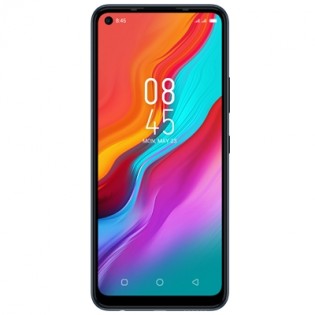 And, in fact, the camera setup is about the only thing left to the imagination by these leaks. That and the display diagonal. We know that the Hot 10 will be based on the MediaTek Helio G70 chipset, along with 4GB of RAM and an HD+ panel, with a resolution of 720 x 1640 pixels.

The X682C and X682B model numbers also popped-up in a TUV Rheinland certification, only offering a single additional detail. It’s an important one, though – battery capacity, rated at a respectable 5,100 mAh. 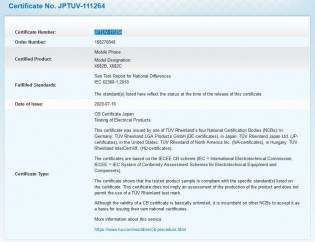 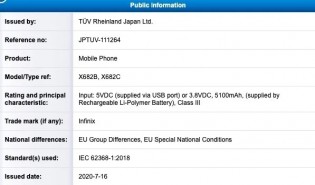 Since Infinix has been keeping a relatively straight-forward lineup lately, we can only assume that the Hot 10 will be one of at least two announced models. The other one, likely a better-equipped Pro variant. Since there is an Infinix Hot 9 Play, as well, a third Hot 10 edition is also likely in the cards. We will keep you posted.

The features and the specs of the Infinix Hot 10 are impressive. Mediatek Helio G70 and the massive battery are good add-ons to the phone in this price range.