The Infinix Zero 8 is only the second device from the Shenzhen company to make its way into the office. Partly the reason for this is the company's particular regionality, operational specific and localized popularity.

Though officially headquartered in China, Infinix actually has a big chunk of its roots in France, since the brand got its start in part after parent-company Transsion acquired the French manufacturer Sagem Wireless. A name that some of our older readers might recognize. Currently, Infinix research and development is mostly done in France and Korea. The brand's products themselves are especially popular in Africa and are now making their way to Asia and the Middle East. As for parent Transsion, their name is hardly well-know either, but its portfolio of brands includes Tecno and Itel, beyond Infinix. All three, together, allowed the Transsion group to be ranked the number six smartphone EOM in India during Q3 2019. Just to get some perspective. 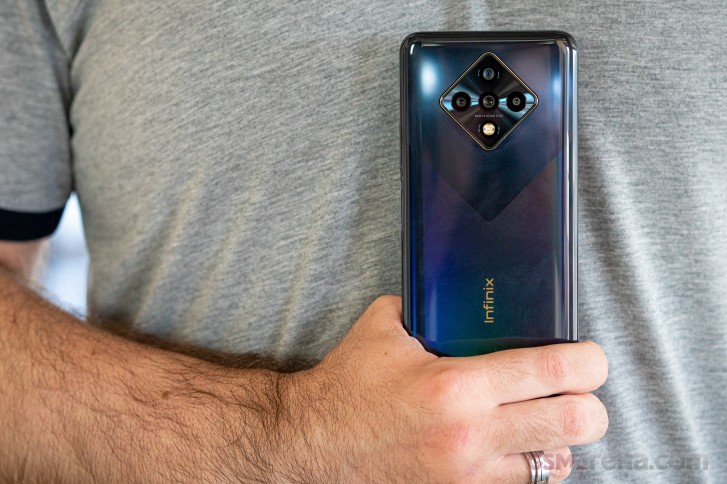 Infinix specializes in high-value, budget devices. The company, however, has cultivated distinct visual styles for many of its handsets. We can only assume that this is part of a brand-building effort. One that we don't get to fully appreciate, due to the company's limited Western presence, but also something that immediately shines-through when you look at the Infinix lineup.

The latest Infinix Zero 8 is a shining example of distinct visual language. The large and distinctive rhombus camera module on the back tends to leave a lasting impression. So much so, that we wonder why we haven't seen this particular visual distinction from other manufacturers. Its effect on the Zero 8 is only further enhanced by the memorable matching geometric pattern on its back. Put the pair together, sprinkle-in a couple of other interesting details, like the flat, recessed fingerprint reader and power-button combo and the dual selfie punchole cameras and you get a truly distinctly looking device. 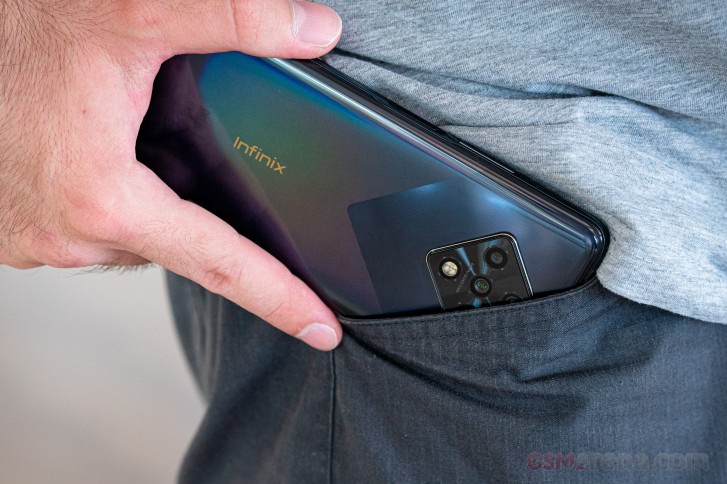 Speaking of cameras, Infinix highlights these are one of the spotlight features on the Zero 8. The Quad Bayer sensor, around back is likely the Sony IMX686, which has already proven its salt on many occasions, in various other devices. Infinix has added some in-house AI on top of it, as well as ultra steady video capture and an in-house night mode. Then there are also the 90Hz display refresh rate and 33W of fast charging. All of this, in a budget package, with an MSRP of around $300.

Speaking of packages, the Infinix Zero 8 has a rather interesting retail box. The sturdy cardboard top half of it features eye-catching glossy accents and references to the rhombus, or diamond-shaped, if you prefer that, design aesthetic. 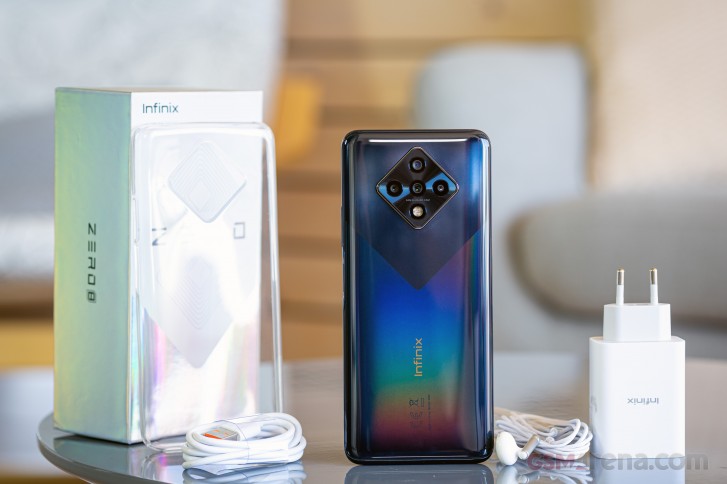 The Zero 8 itself resides in a secure cradle, made from plastic. In terms of accessories, you get a wall charger, rated at 5v@3A and 10V@3.3A, which is how the Zero 8 gets its 33W of charging. Alongside that, a USB Type-A to Type-C cable, with a rigid rugger finish and orange accents on the connectors.

Beyond these basics, Infinix has also thrown-in a pair of earbuds, complete with a microphone and company branding. Nothing too spectacular in terms of quality, but solid enough for a free add-on. Same goes for the transparent plastic case, included in the box. It even has a sufficiently big camera lip to offer protection for the camera front glass.

Slightly hidden alongside leaflets, there is also a screen protector. It's also nothing particularly special, just a soft one. Even so, it's clear that Infinix wanted its users up and running straight out the gate with the Zero 8, providing all of the essentials right in the box. There are even brand stickers, if you want to show some brand love.

My phone lost camera 2apps mainly camera and a gallery!!! How can I restore them

Yes, its VoLTE supported phone. I have my zero8 phone and its supports VoLTE here in Philippines.