iPhone 7 Plus and its A10 chip perform great in Geekbench

The iPhone 7 Plus has allegedly ran the GeekBench multiplatform testing suite and managed a single-core score of 3379 points. That's 10% more than what the phone managed back in July when it first appeared on the benchmark's database.

However, when assessing that difference keep in mind that this new test was performed using the new Geekbench 4, while the previous one used then-available Geekbench 3. The results are not directly comparable across the two versions of the benchmark, because "Geekbench 3 is normalized around an Intel Core i5-2520M having a score of 2500, while Geekbench 4 is normalized around an Intel Core i7-6600U having a score of 4000", according to XDA-Developers. Geekbench 4 should overall prove to be much more accurate, but the key point here is this - the same device tested in both Geekbench 3 and 4 will yield different results in each. 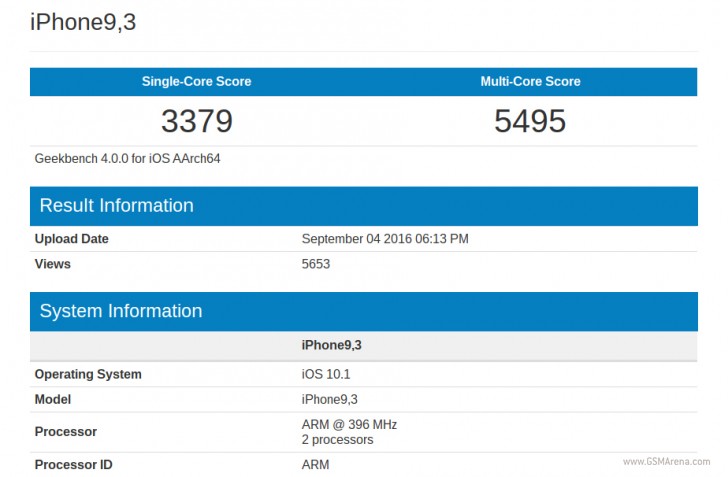 We'll need to wait for a bit more time to pass and more devices to be put through the paces of the new Geekbench 4 in order to assess how well Apple's latest is doing compared to the competition.

The iPhone 7 Plus and iPhone 7 will be official on Wednesday following Apple's dedicated smartphone event.

Apple is countersuing Ericsson in the US, seeks import ban on its 5G equipment

Apple no longer has security patches for iOS 14, confirms this was “temporary”

The iPhone SE+ 5G will become available in late April or early May, claims analyst

Hehe, judging by your comment it's obvious that you're still young. I guess what I wrote must've really hurt your feelings and you go so personal and emotional on me with this 'stupid' and 'simpleton' (learned this at school today? :D) shit. Keep cal...

You must not have used either

You must be new to android and ios