Counterpoint Research has published its analysis of the Chinese smartphone market for the whole of 2017, and some interesting tidbits have been revealed. The best selling handset over there last year was the Oppo R9s, commanding 3% of the market. The second place goes to the iPhone 7 Plus, while the vivo X9 completes the podium.

There are three Oppo devices in the Top 10, two from vivo, Apple, and Honor, and a lone Xiaomi entry - the Redmi Note 4X. Thus, Apple is the only foreign company to have a handset in the Top 10 best selling devices in China. The best performing local companies are clearly Oppo and vivo, incidentally both owned by BBK Electronics, as well as Huawei and Xiaomi. 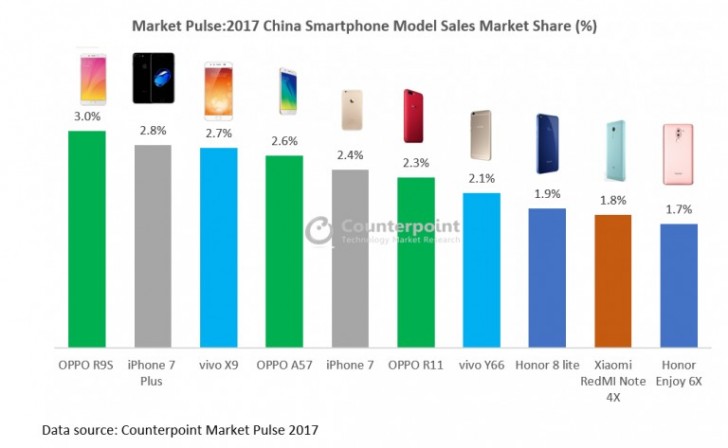 The mid-range segment is the most popular in China, with Apple's iPhone 7 and iPhone 7 Plus being the only outliers from this point of view. The average monthly sales volume of all Top 10 models was 1 million in 2017.

Counterpoint says Oppo's success is due to its relentless focus on marketing its products as selfie experts, as well as its extensive offline store network. Additionally, most of its handsets are priced in the $200-$450 bracket, which is the most popular segment in the Chinese market. It's also offered a limited number of models and was thus able to put more marketing muscle behind the promotion of each one.

The launch of the iPhone 8, 8 Plus, and X means price cuts of around 16% were applied to the iPhone 7 and iPhone 7 Plus, which made these much more attractive for Chinese consumers.

In 2018, Counterpoint expects 'bezel-less' displays to become a standard feature of the devices in the Top 10, while well-marketed photography skills are bound to remain extremely important for Chinese smartphone buyers.

Oppo F5 Youth arrives in China as Oppo A73

10 comments on this article. No wonder. Anyway, this is amazing work by Apple. Entering the Chinese market and performing this way is a feat and shouldn't be taken lightly. Apple really are the kings of the mobile industry whether you like it or no...

Amazing performance by Apple. Rivals constantly frustrated. How do they keep this up?