So, the new Apple iPhone SE went official yesterday and it's very much an iPhone 6s internals in a 5s body. Well, almost...

As you've probably heard, the SE will not support Force Touch, but on the upside, AnTuTu detected 2GB of RAM - as much as the 6s has and double what the 6 and those before it had. 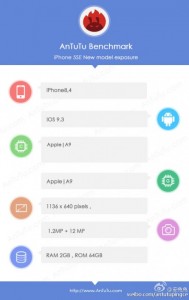 AnTuTu shows 2GB of RAM on the iPhone SE

For one, the Touch ID sensor is the slower first-generation, unlike the 6s models (first-gen was also used on the iPhone 6).

The iPhone SE uses the M9 motion co-processor but lacks a barometer. This was used for activity tracking as a power-efficient way to estimate how much you've climbed (going up the stairs, for example, before that the GPS was used).

1. "so far...I have NOT sold any of my phones as am passionate to keep all" If you're so passionate about keeping your iPhones, then what's the point of bragging about it's resale value ? 2. "To your point if you think that millions of people are...

You're trying to tell me that there is not even a little bit of logic in what i've said? That's sad, but it's OK. You're not the one targeted with this phone. I might be one of them, but I won't afford it. Overall, it's all about personal experien...

If it works with other stuff, like cars or buildings, it worth trying on phones, too. It's really about some people's personal taste. Apple did a lot of "trade in"-s, they maybe had a lot of new items (5s or maybe even 5) in stock, and not to waste t...