The Xiaomi Mi 11, the first Snapdragon 888-powered phone to hit the market, claimed the title of fastest phone in the AnTuTu rankings for December (overtaking the Mate 40 Pro). In January it was dethroned by another 888-based phone, the iQOO 7.

The performance-oriented iQOO managed to open a gap to the Kirin 9000 crew, previously the Huawei Mate 40 Pro+ was just a hair behind the Mi 11. Note that AnTuTu includes RAM and storage in its score calculations, so for every phone the version with the biggest memory capacity wins out. 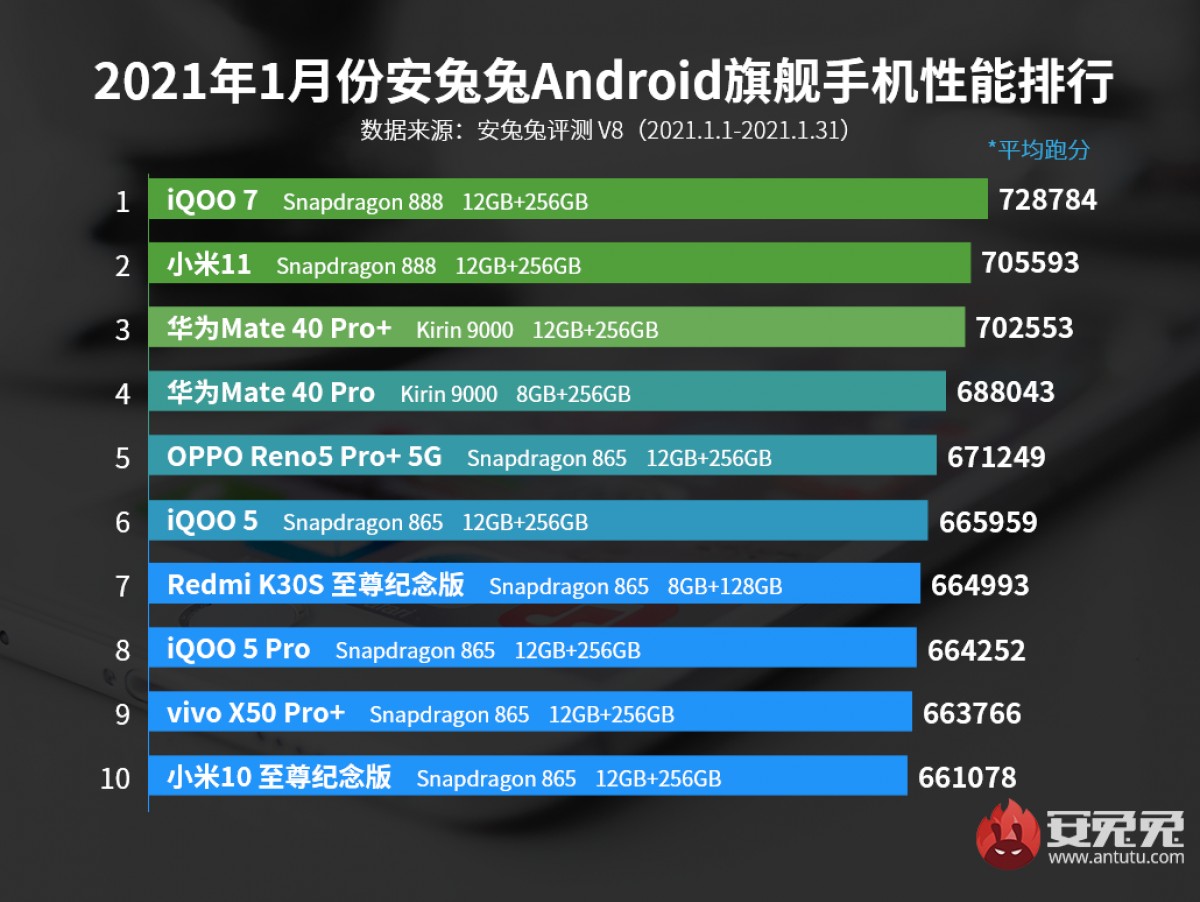 Interestingly, the Mi 11 score has declined slightly since December (was 708,425). AnTuTu averages scores across multiple units rather than using the top result from one phone. It appears that there’s some variation in performance from unit to unit.

That’s it for the flagships, now let’s look at the mid-range championship. The Redmi 10X 5G retains first place while its sibling, the Redmi 10X Pro 5G, improved its performance and rose to second place (was fourth in December). Both use the Dimensity 820 chipset and have the same physical dimensions, so this was just a case of the Pro underperforming.

Another sibling rivalry saw an upset as the Huawei nova 7 5G edged out the nova 7 Pro 5G (whose average score declined slightly). Finally, the Reno5 5G pushed past the Redmi Note 9 Pro 5G to get the #8 spot.

There should be some fresh blood soon as phones with the Snapdragon 870 and the Dimensity 1200 are on the way.

Despite of the highest antutu score it is heating very much while charging and playing games but a14 bionic and kirin 9000 never gets heat but low their performance. Interesting 🤔

Xiaomi started block gsm on china rom. I kind wish to buy another xiaomi in near future but no more. I use Gsm from gaming to work related. furtunely, my phone global rom but who know it gsm will be remove in near future. So i might avoid xiaomi.

R u Calling itz a Brand to a Chinese mobile !😱 How Funny itz itz t