The iQOO Z5 will be unveiled on September 23 at an event in China, which will begin at 2:30PM local time. And while iQOO is yet to reveal the Z5's pricing and availability details in its home country, a reliable source tells us that the smartphone is expected to debut in India by the end of September. That's good news since iQOO took over two months to launch the Z3 in international markets. It was announced in China in March and began its global journey in June, again starting with India.

As far as official information is concerned, iQOO today announced that the Z5 will pack a 5,000 mAh battery, which is an upgrade of 600 mAh over the Z3's cell and can offer 96 hours of music playback, 18.3 hours of video playback, and 10.4 hours of gaming. 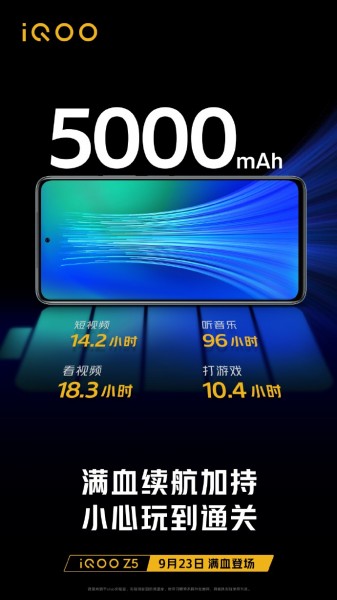 More information about the iQOO Z5 will likely surface in the days leading to the September 23 unveiling.

The global version of vivo iQOO 8 Pro appears on Geekbench