The MX4 Pro smartphone, which was launched by Meizu just six months ago, is no longer in production. The news was revealed in a Facebook post (see image below) by the Turkish division of the Chinese company. 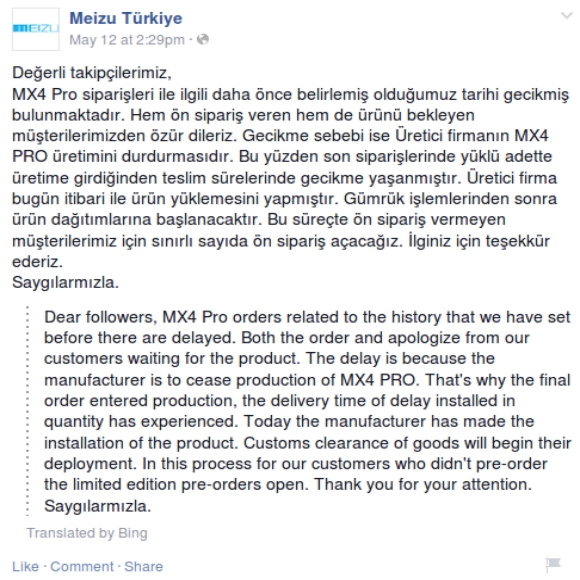 Although the company hasn't yet officially confirmed it, what's adding weight to the news is the fact that the device is now available on discounted rates in China - it is currently carrying a price tag of CNY 1,999 ($322), compared to CNY 2,499 ($402) when it was launched.

The news also comes just days after there were reports that chipmaker Mediatek has invested in Meizu. It's worth mentioning that the MX4 Pro is powered by Samsung's Exynos chipset.

Great battery and camera, very fast!! But Flyme is not finished, altough has potentia. People saying that it has battery etc. are not being honest. It is great phone and very powerful. Battery lasts 1-2 days. Unlike Samsung and others.

i never haf such bad battery life like.on meizu also their updates are terrible my first and last chinese phone

Sorry but I did not see any price drop here in China, and on Meizu website the MX4Pro is still at 2199 yuans for months.