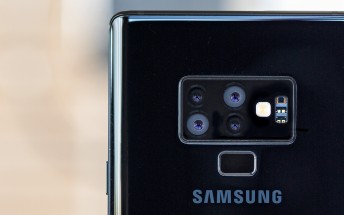 Samsung may be readying a device with four cameras on the back and it won't be a Galaxy Note nor a Galaxy S (nor the foldable Galaxy F) phone. The information comes from Twitter user and popular leakster Ice universe.

In his tweet Ice universe makes clear we're talking about a device that will launch in 2018 with four cameras, although no details were provided.

So, what could it be? If we had to guess we would take a pick among Samsung's A series and say that it could be a Galaxy A9 device for 2019 - those typically launch at the end of previous year. Since the current A-series have dual front cameras it's not hard to imagine that the next gen will also pack dual rear ones as they often inherit Galaxy S flagship features.

Photographers don't use camera phones. What are you talking about? What a joke. Phone cameras are garbage.

It's going to be an exciting time for photographers:D