It's still pretty early for believable leaks of the whole design (those start popping up closer to the announcement) but some parts are certainly already in testing so there might be something to this.

Straight off Chinese leakster CTech responsible for credible specs leaks and a video of a working iPhone 5c in the wild come two images of what appears to be a metal housing. According to the source the housing could belong to the upcoming iPhone 6. 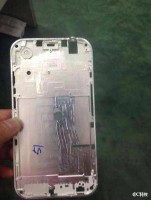 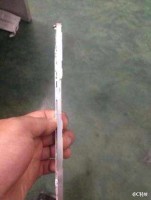 The screen that could be mounted on the housing is quoted at 4.7" (supporting earlier claims) or even slightly larger - 5". The housing also points to a thinner frame, perhaps around 6 mm.

However the body seems wrong somehow. It looks wider and shorter than the iPhone 5s. But words aren't enough, just check out the image we concocted below. It seems that if this housing is true to life the next iPhone/s could finally reduce the huge bezels around the screen.

As we said - it's still early days. This could turn out to be a deliberate fake. But China is the place we'd expect credible leaks to come from.

Beats Studio Buds will cost $150 according to the latest rumor

How can you say it's ugly like hell??? It's the frame of the phone?? hahaha