Kantar: Amazon has the most valuable brand globally, followed by Apple and Google

Kantar published its BrandZ report, which lists the most valuable brands globally. The #1 spot is held by Amazon with a brand value of $684 billion, up a whopping $268 billion (+64%) compared to last year.

Samsung is #42 on the list, Huawei is a bit further down in #50, then further down is Xiaomi at #70. This is an improvement of 11 places compared to last year and the brand now between Budweiser and BMW. 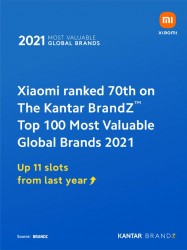 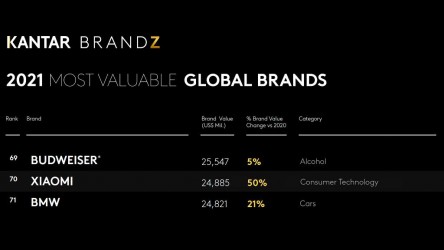 The Xiaomi now has the 70th most valuable brand in the world (up 11 places), according to Kantar

The fastest growing brand this year was Tesla, which shot up 275%, followed by TikTok with +158%, the two companies are #47 and #45 on the list, respectively.

Subscription businesses grew in popularity during the pandemic and lifted their brands up the ladder: Xbox is up 55%, Disney is up 13%, Netflix is +55% and Spotify improved enough to get into the Top 100 for the first time.

Below is the full BrandZ infographic showing the Top 100 most valuable brands around the world:

Amazon is simply number one, no doubt. All my money goes to Amazon.

I bet on the opposite. Samsung will throw everything at foldable phones and will eventually find out that the physics does not allow glass to bend, and that plastic is not a high quality material... then it will go down.