Samsung is seeding a new update for its Galaxy S21 series users running One UI 4 beta based on Android 12. The new update bears the ZUK1 firmware version and should be available for beta testers in all regions where the firmware is currently available to test out.

The update changelog presents a long list of bug fixes and optimizations including ironing out performance lag at QHD resolution for the S21 Ultra, fixed Wi-Fi hotspot functionality and fingerprint recognition after reboots among others. The full list is presented in the screenshot below. 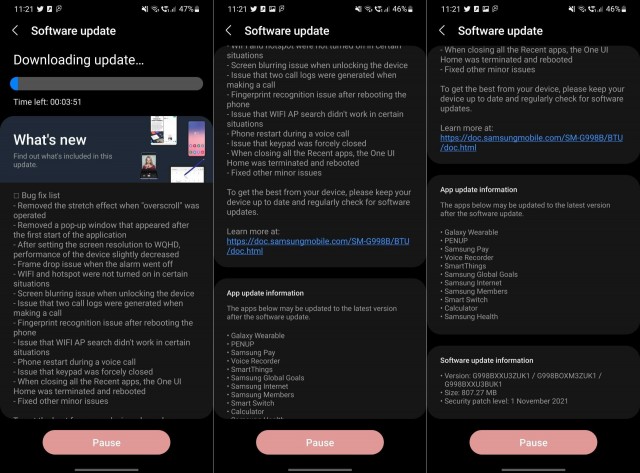 The latest update comes in at just over 807 MB in size and also brings the November 1 security patch. Samsung recently began expanding its One UI 4 beta to Galaxy Z Fold3 and Z Flip3 users though it has not yet offered a detailed timeline when or if other devices will be eligible for the same treatment.

Samsung releases another One UI 4 Beta for Galaxy S21

It's a build for Devs, not every day usage. You won't have the stability of even an RC. Expect bugs, don't complain about them.

Samsung has been zipping off with every update, be it Beta, Features or Security Patches. Don't know what made them this fast, I guess the CEO put fire on the software engineers' seats.

nah, stock android have nothing to optimize fold form factors. multitasking on OneUI is great, three way multitask with one additional floating widgets and persistent taskbar on the left side is something that stock android cannot provide.