The guys over at XDA-Developers have performed an APK teardown of the latest Google Phone APK (version 22). This is the default telephony app that is used on Google’s Nexus and Pixel devices. The latest feature slated for this dialer is a call-screening feature that would keep spam calls from interrupting you.

According to the teardown, the Phone app’s new feature is called “Call Screen” and it will apparently work without the need for an active WI-Fi or data connection – to do this, it will use a real-time audio transcription of the incoming call to warn you if the call has a robot at the other end. 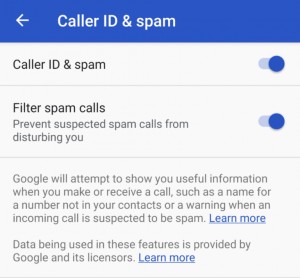 Here are a couple of the text strings found in the commit: Screen unwanted calls with real-time audio transcription and quick responses, and: Call Screen works without Wi-Fi or data. The conversation audio and transcript are saved only in your call history, only on your phone.

You’ll be able to send Quick Reply SMS messages to the screen phone calls over SMS, according to the commit. At this point, it’s still not entirely clear how the feature will work. In its current state, the feature is still incomplete, and it’ll likely be at least a month or two before we see this feature fully implemented. Given the timing, we’d probably be seeing this feature make it to the Pixel 3.

Head over to the source link to see the full APK teardown over at XDA-Developers.com