Leak: the Honor 60 Pro will have larger display and a 50MP ultra wide camera

A leak from yesterday detailed the Honor 60 specs, but the Pro variant managed to keep its secretes. Until today that is, as leakster Ishan Agarwal has discovered what the upgrades will be over the vanilla model.

The Honor 60 Pro will feature a 50 MP sensor in its ultra wide camera (sensor size unknown). The lens will have an f/2.2 aperture and autofocus, allowing it to shoot macro photography. For comparison, the vanilla model will have an 8 MP sensor. The selfie camera on the front may be another upgrade with a 50 MP sensor (it’s just that the selfie cam on the vanilla phone is unknown).

Other than that, the Pro model will feature the same 108 MP main camera on its back and a 2 MP depth sensor (meaning that zooming duties fall on the main sensor). 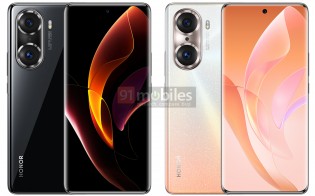 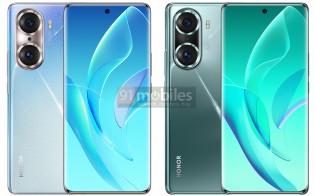 Also, the chipset processing the images from these cameras will be the same Snapdragon 778G+. Buyers will be able to choose between 8 GB and 12 GB of RAM, storage will be 256 GB. The phone is expected to run Android 11 with Magic UI 5.0 out of the box.

The Pro model will also have a larger display, 6.78” (up from 6.67”). It will be an OLED panel with 1080p+ resolution (429 ppi) and a high but unspecified refresh rate. The renders show a quad-curved display, whereas the display on the vanilla model was curved only on the sides.

Strangely, the Honor 60 Pro will have a slightly smaller battery with 4,500 mAh capacity compared to its sibling (4,800 mAh). And that’s apparently not a concession made to enable faster charging, the rumored specs claim the same 66W.

The Pro model will measure 163.9 x 74.8 x 8.2 mm and weigh 192g, making it slightly bigger than its sibling. It will be available in four colors as seen in the renders above: Bright Black, Juliet, Starry Sky Blue and Jade Green.

The Honor 60 duo will be officially unveiled in China tomorrow, so stay tuned for pricing details.

Ofc zenfone 8 has 50mp imx 766 and gn2 w/ois man. And it does have like periscope it does have super ultra mega fast charging right?

No, currently a kirin user, but no TSMC+Huawei business due to US sanctions.

Kirin is going to come back. Honor though, will remain independent brand, probably.