Leaked pricing surfaces for the Meizu m2 before its release

The Meizu m2 note has been on sale in China since last month, but the situation is not the same for its smaller sibling. The Meizu m2 should be released on July 29, which is this Wednesday.

Whereas the m2 note is the successor to the m1 note, the m2 is obviously the improved version of the m1. Today, through a retailer listing, we get a confirmation of its specs, but we also get to know how much it will cost. 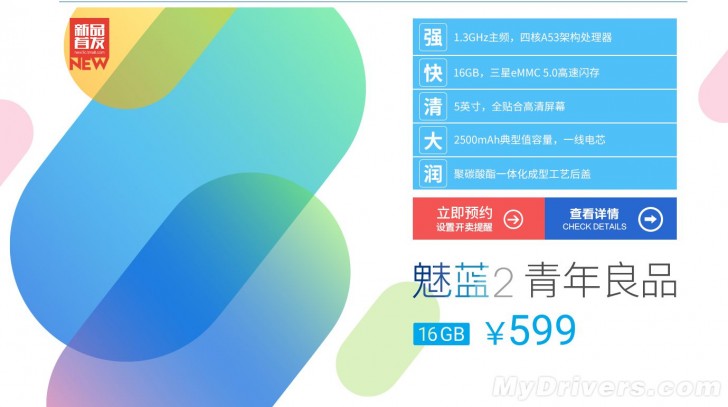 Previously leaked or rumored specs also talked about the m2 coming with 2GB of RAM, a microSD card slot, a 13 MP rear camera, a 5 MP front-facing snapper, and a thickness of 8.7mm.

Oddly enough, in its report about the m2, TENAA said it has a 2,700 mAh battery. It's not clear yet which capacity will turn out to be in the actual phone, but we're only days away from finding out definitively.

For all of this hardware you'll need to pay just CNY 599 - if you're in China, of course. That currently translates into $96 or €86. Given the price point here, we assume one of the m2's main competitors will be Huawei's recently revealed Honor 4A, which features similar specs.