HTC has not completely fallen off the face of the Earth - @evleaks just shared a schematic of the HTC Desire 20 Pro design and its code name, “Bayamo”. When it is officially unveiled, this will become the first HTC phone with a punch hole camera.

That said, the phone doesn’t give into other modern trends and keeps its display flat. And if this schematic is accurate, the bezels will be pleasantly thin (even more impressive is that side and top/bottom bezels are actually even for a change). 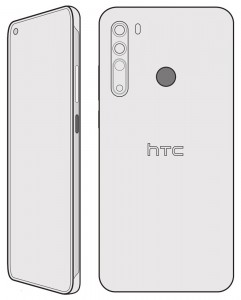 The quad camera on the back reminds us of Oppo’s Reno3 phones, which have a similar two-level camera island with a dual LED flash off to the side. The smallest lens at the bottom is most likely a depth sensor while the function of the other three is anyone’s guess. Notice the rear-mounted fingerprint reader – this is a mid-range device and it keeps things basic.

Including the chipset, a Geekbench result points to a Snapdragon 660 (or 665), which was connected to 6GB of RAM and was ran Android 10.

It’s not seen on the schematics, but one leakster claims that the HTC Desire 20 Pro will have a 3.5mm headphone jack. We’re not sure how all this aligns with the new CEO’s plans to target high GDP markets, but we’d enjoy seeing a new HTC model all the same.

HTC Desire 20 Pro reportedly in the works, spotted on GeekBench too

HTC should consider colour that will suit the phone before releasing the phone not always blue, at least they should be in different colours like white, black,red colours