LeEco sprang back to life earlier this year when it announced a pair of TWS earbuds with active noise cancellation. But the company has grander plans and sent out invites for a May 18th event.

The invite is laconic, with “I’m back” written in large font. Below that it unveils the name of the event, “LeTV Smart Ecological Conference”, which is quite vague. So, what’s this about? 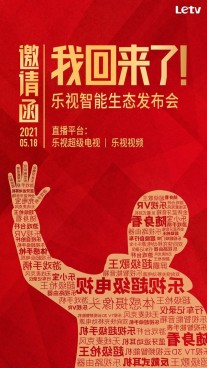 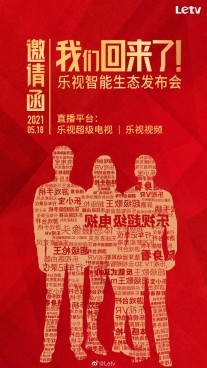 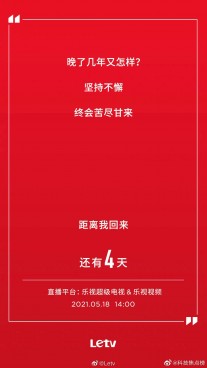 Several versions of the invite teasing LeEco's May 18 event

If you look closely, there’s a mirrored “TV 3D” in the bottom right of hte first invite. And a mirrored “VR” appears a couple of times. You can see them in the second invite too. Whatever the event is about, it will be broadcast on the LeTV Super TV and LeTV Video platforms.

LeTV, the company that transformed into LeEco, started life as a streaming platform. It was once seen as China's Netflix, among other things as it diversified into making TVs, smartphones, smartwatches and other electronics. Judging by the invite, it is going back to its roots and will focus on multimedia.

I had a LePro 3 and really liked it. The UI was questionable but the price was great and I liked camera. Hope they make a comeback.

leeco had great smatphones i hope they will be sold also on global market.